Halfway up a mountain in the Canadian Rockies exists a very unique place, a true natural wonder; the Booming Ice Chasm. 5 pitches of fun, anxiety, and excitement. This day was truly an incredible adventure that we will not forget soon.
Read time: 8 minutes.

The Booming Ice Chasm cave contains a 180m long sheet of clear ice that never melts. It is protected from the heat of summer by a year-round pocket of freezing air. Since its discovery in 2008, the cave has received coverage from multiple high-profile media outlets, as well as an entire episode of the 16x9 news program. But somehow, this icy wonder sees few visitors, which might be for the best. Everyone who has been there has kept the details to a minimum, which is a pattern I will follow. 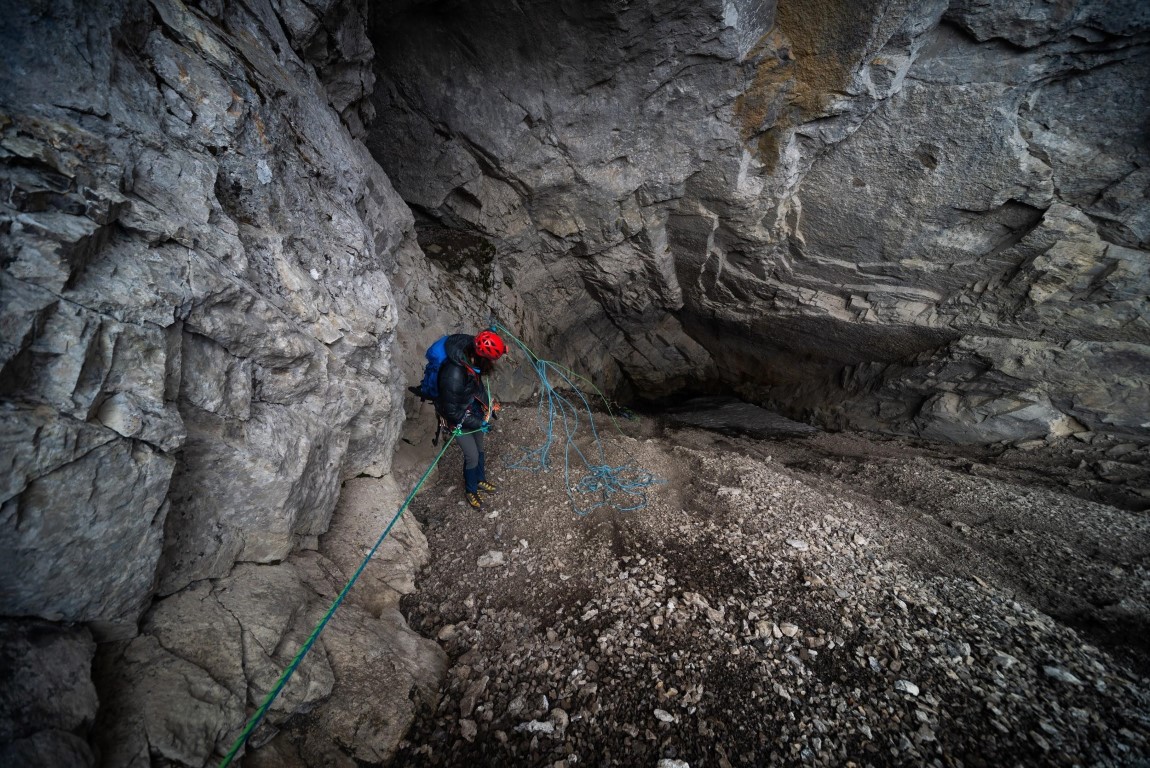 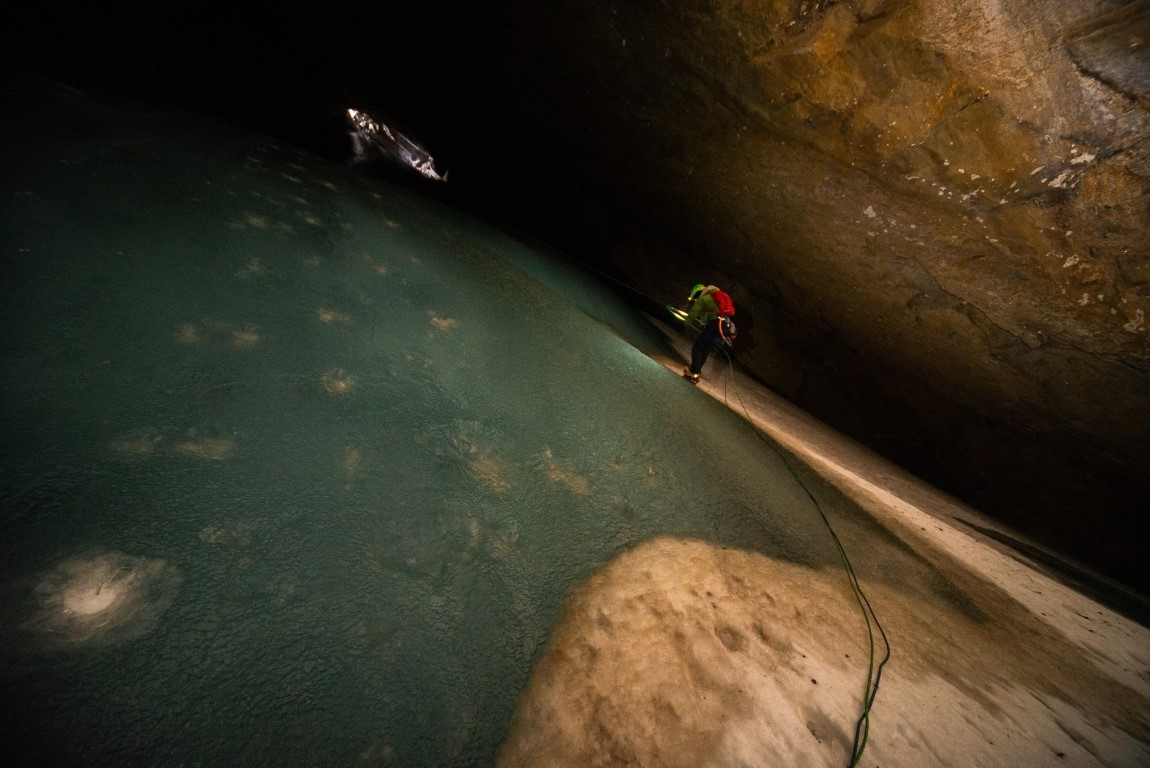 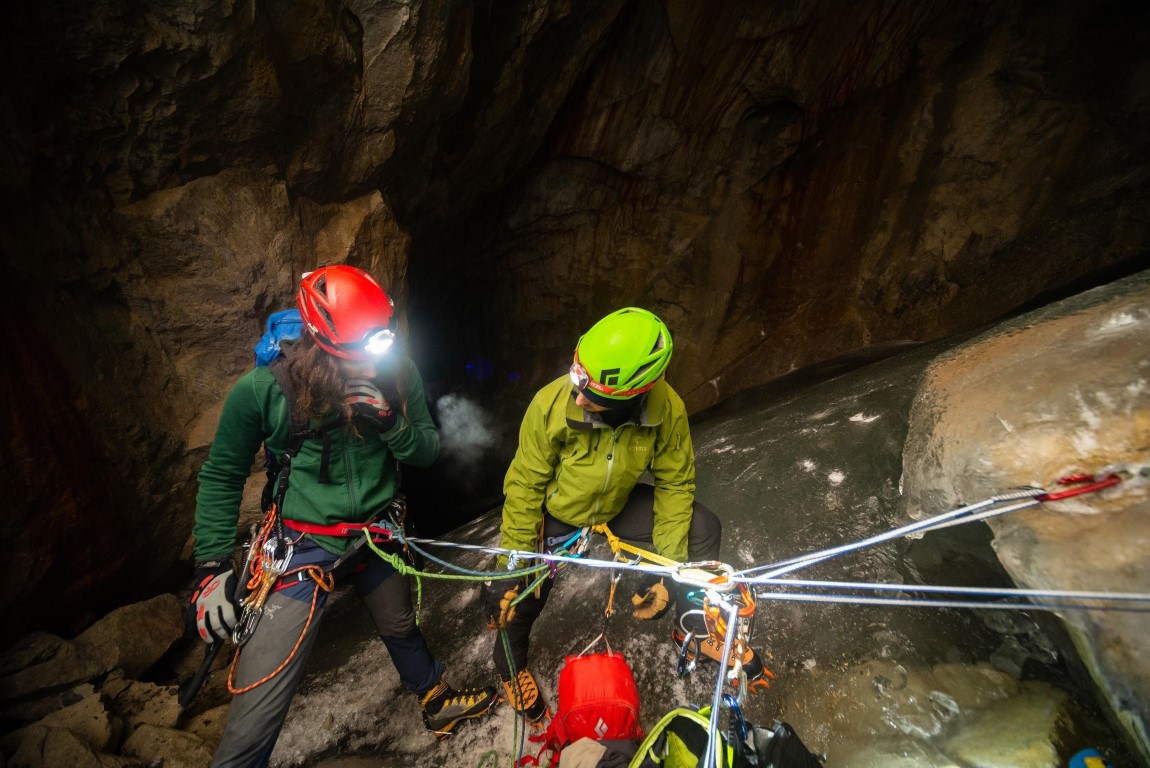 Somethings never get less impressive the more you see them; the mouth of the booming ice chasm is definitely one of them. This being my second trip to the cave, I was expecting to be less intimidated by the cave. However, as I peered down the massive funnel I was just as anxious as the first time I laid eyes on it. This time, I had fellow Vertical Addiction employees Branden and Aidan with me. After having taken some pictures and taking in the views, we started to put on our climbing layers and boots. Once we had our gear on, we threaded the ropes through the first anchor and tossed the ropes down the scree toward the caves entrance. This first rappel goes down low angle scree and snow that funnels down to the narrow entrance to the cave, about halfway down you hit the wall of cold air that preserves the ice. 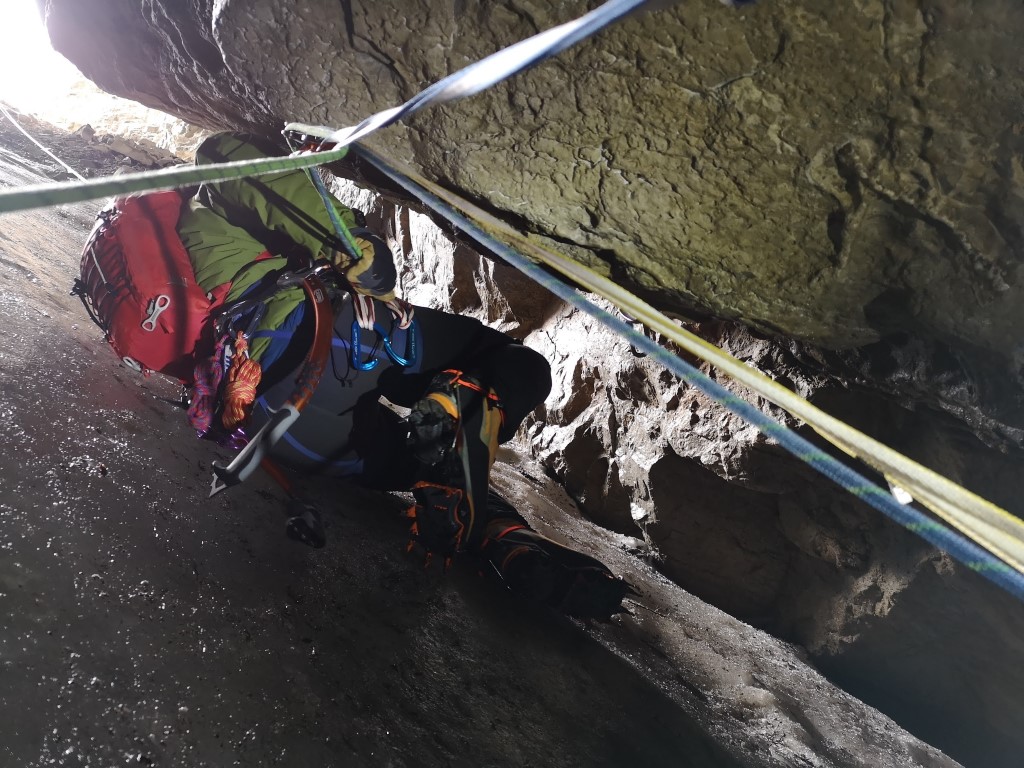 Once in the mouth, there is a two-bolt anchor on the roof of the cave, which is about 4 feet above the ice. This anchor is very awkward to stand at, and it's scary because the next person coming down must be very careful not to dislodge any scree as the anchor is right in the line of fire. Below the anchor, the ice steepens and drops away into the abyss, the blackness eats the beams of our headlamps and any sound loudly echoes. After we all arrived at the anchor, we pulled the ropes and tossed them into the darkness below. The next rappel goes down the steeper ice for 15 meters before backing off to a lower angle, I went down a total of 55 meters to a flat top, atop a bulge feature, where I built a v-thread. Once my eyes adjusted, I found myself in the most amazing place in the world. A massive chamber - 30 meters wide and 20 meters high -with beautiful streaked limestone walls. On the far side, there is a 20 meter frozen flow and an incredible chandeliered piece of ice that is almost the height of the cave. Another rappel down low angle ice brought us to a bolted anchor among several large boulders, frozen in the ice. One more rappel brought us to the bottom of the cave: a large chamber with a frozen lake. 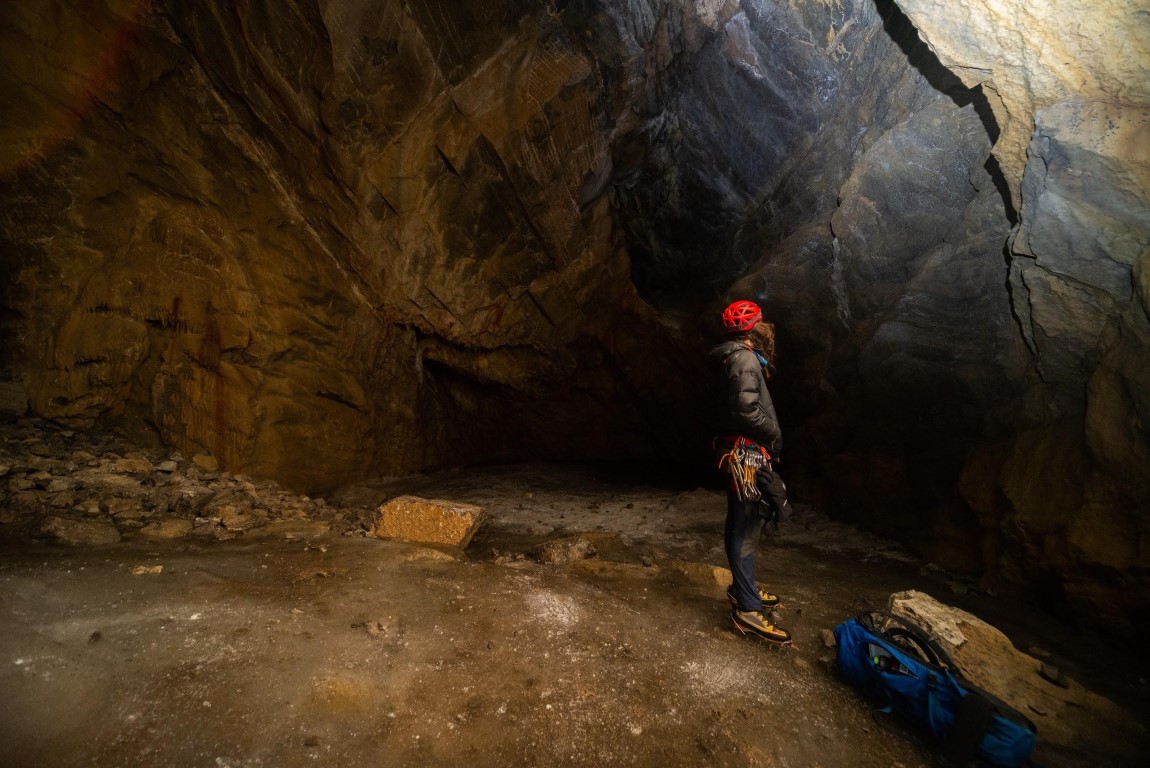 After a quick break at the bottom, we decided to start the climb back out. The first pitch was easy low angle ice. Branden started motoring snow and scree towards the ice on the right side. Once on the ice, he climbed up near the right wall. The ice starts off as a bit thin but quickly becomes fat clear ice. Following this pitch was a great way to warm up the calves for the pitches above. 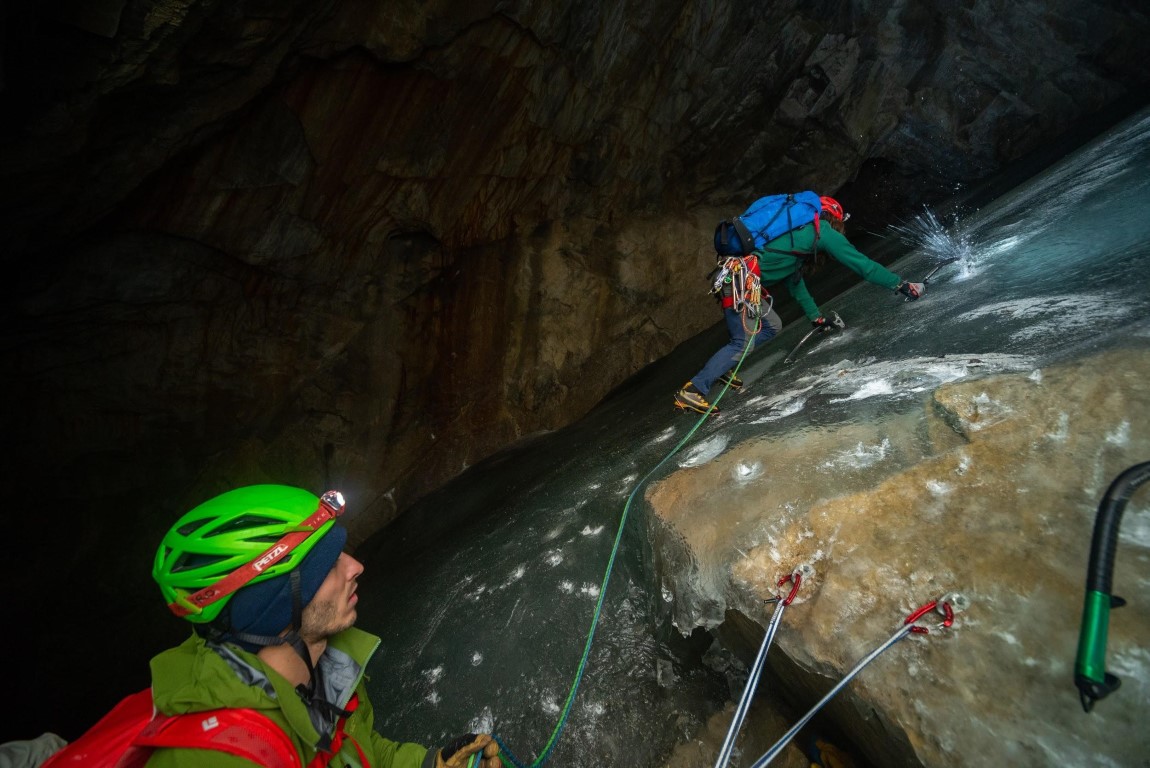 At the belay station, I took the lead and peeled left and up the low angle ice, periodically using the calf resting techniques I had learned on my last trip into the cave. The ice is perfectly flat and has no features to rest on, so efficiency is key for not having fiery calves. I ended this pitch at the base of the steeper bulge feature, about 45 meters from the last belay. 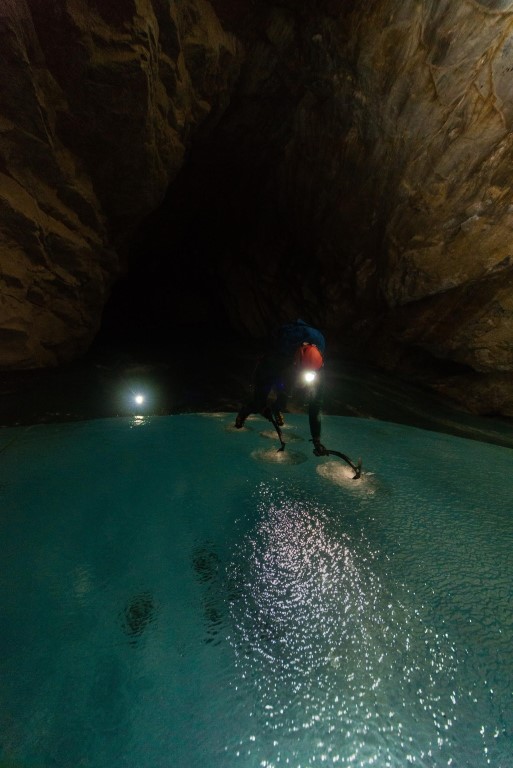 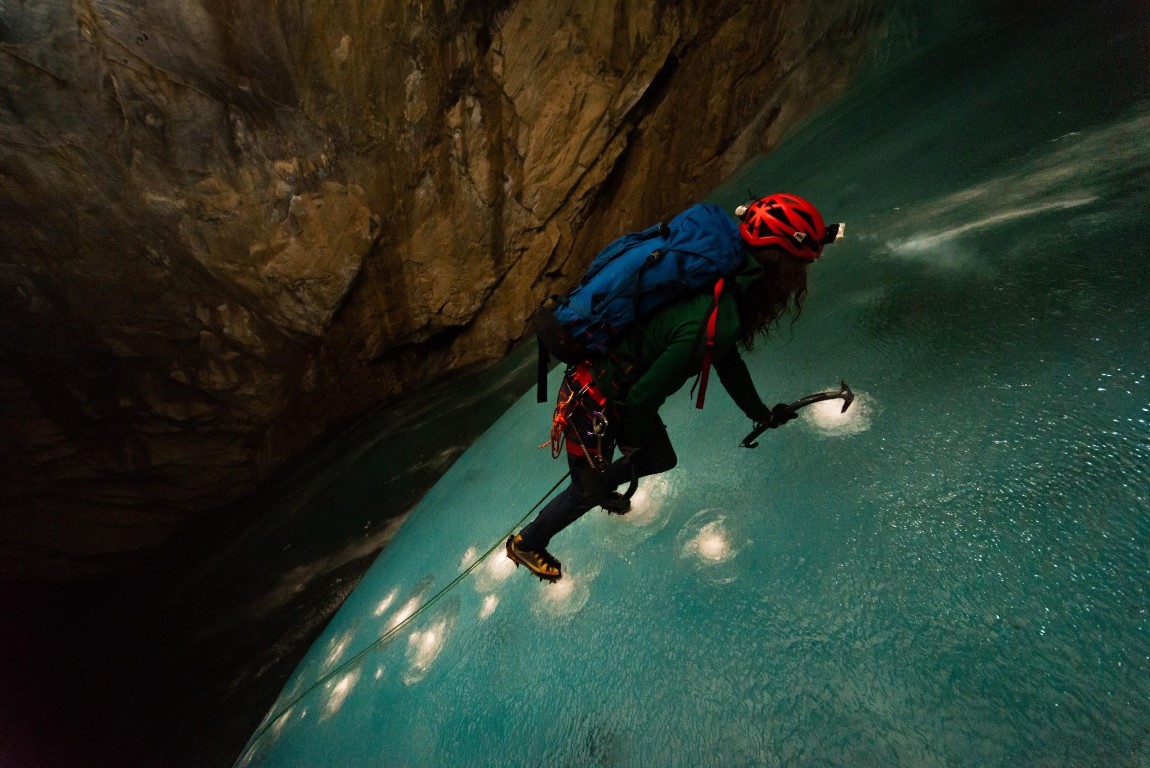 Once Branden was in position, I cut left and took the steepest part of the bulge head on. The ice wasn’t too steep, but it was definitely steeper than the other pitches. It was nice because for a few body lengths I could rely a little more on traditional ice climbing techniques to rest my calves due to the increased angle. The ice was transparent, and it felt like I was flying. Unfortunately, the angle started to back off and before I knew it I was on top of the bulge. 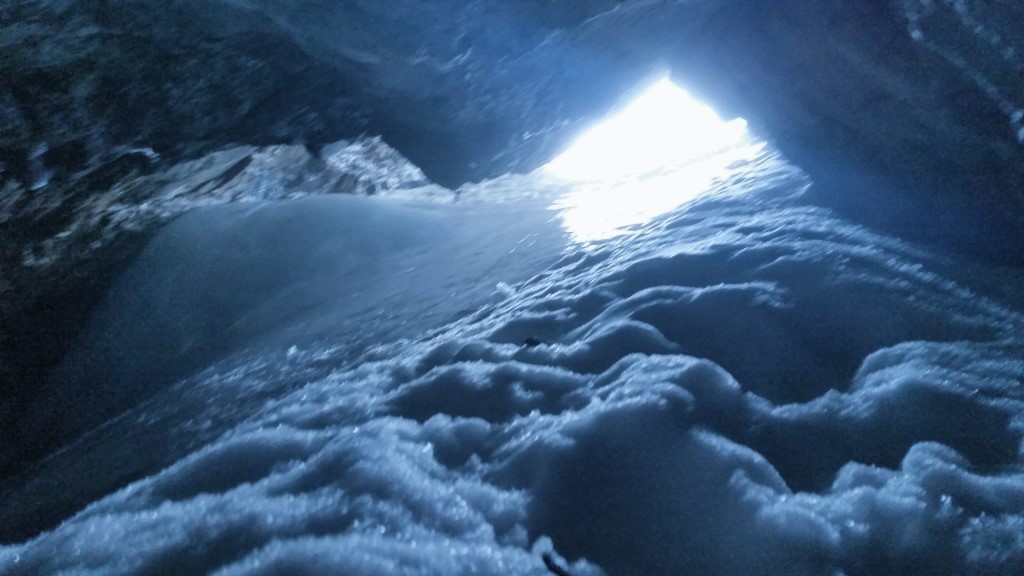 This next pitch was pure calf doom, the memories of searing calf burn was still fresh in my memory from when I was last in the cave. Thankfully, Branden stepped up, so I didn’t have to lead it again. Branden battled up the sustained ramp of hard clear ice, resting his calves whenever he could, but the burn didn’t stop him from getting to the top of the steep section and getting in a belay 20m from the exit. 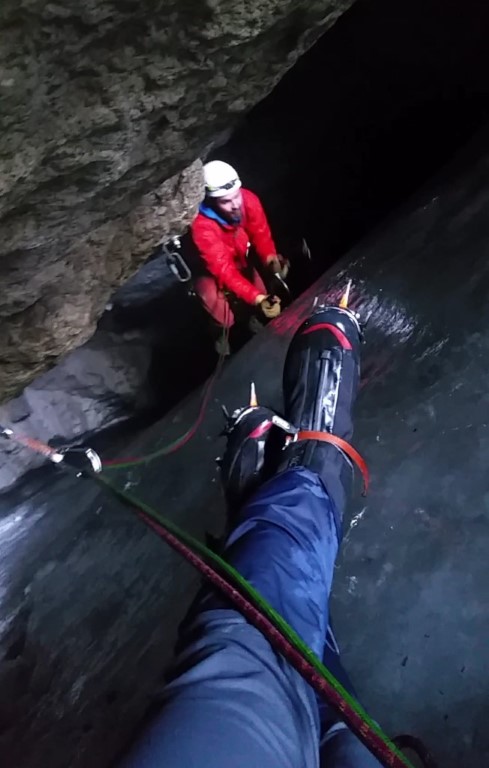 I was left with a short pitch to the top. After a section of ice, I got to a snow rest where I dumped my pack, so I could wriggle my way through the final squeeze to freedom unencumbered. I set a belay when I got some headroom and brought the boys up. They grabbed my pack on the way past and climbed up onto the snowfield above.

From there, we scrambled up to the ledge into a blowing snowstorm! We quickly transitioned back to hiking and started to race down the trail again, all of us still processing the experience we had just had. All the fun, anxiety, and excitement that place had brought us was truly an incredible adventure that we would not forget soon. 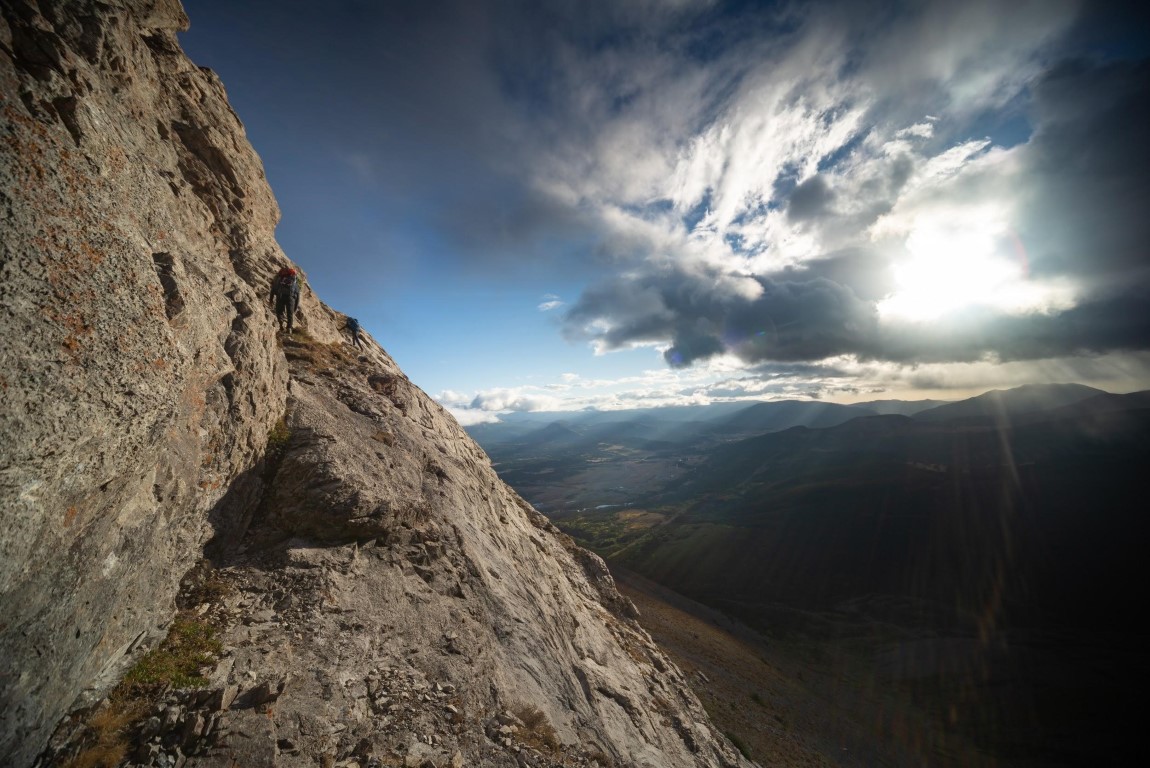 If you do end up visiting this area, try to limit the details you release to the public. You have probably realized that I didn’t mention anything about the cave's location or approach beta, this is because finding it is part of the adventure. Anybody who really wants to go here can find it with all the details available online. 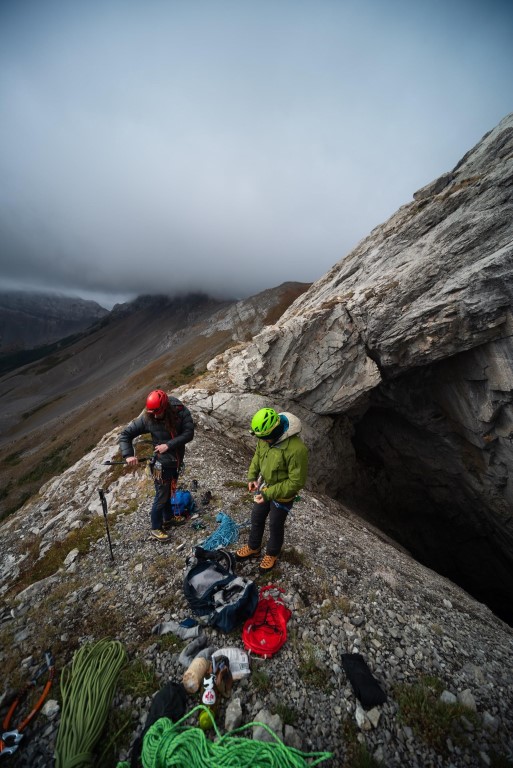