All in all, this route makes for a great day out moving up snow and ice slopes, with a chance to swing some tools and place some rock gear along the way. (read time: 6 min) 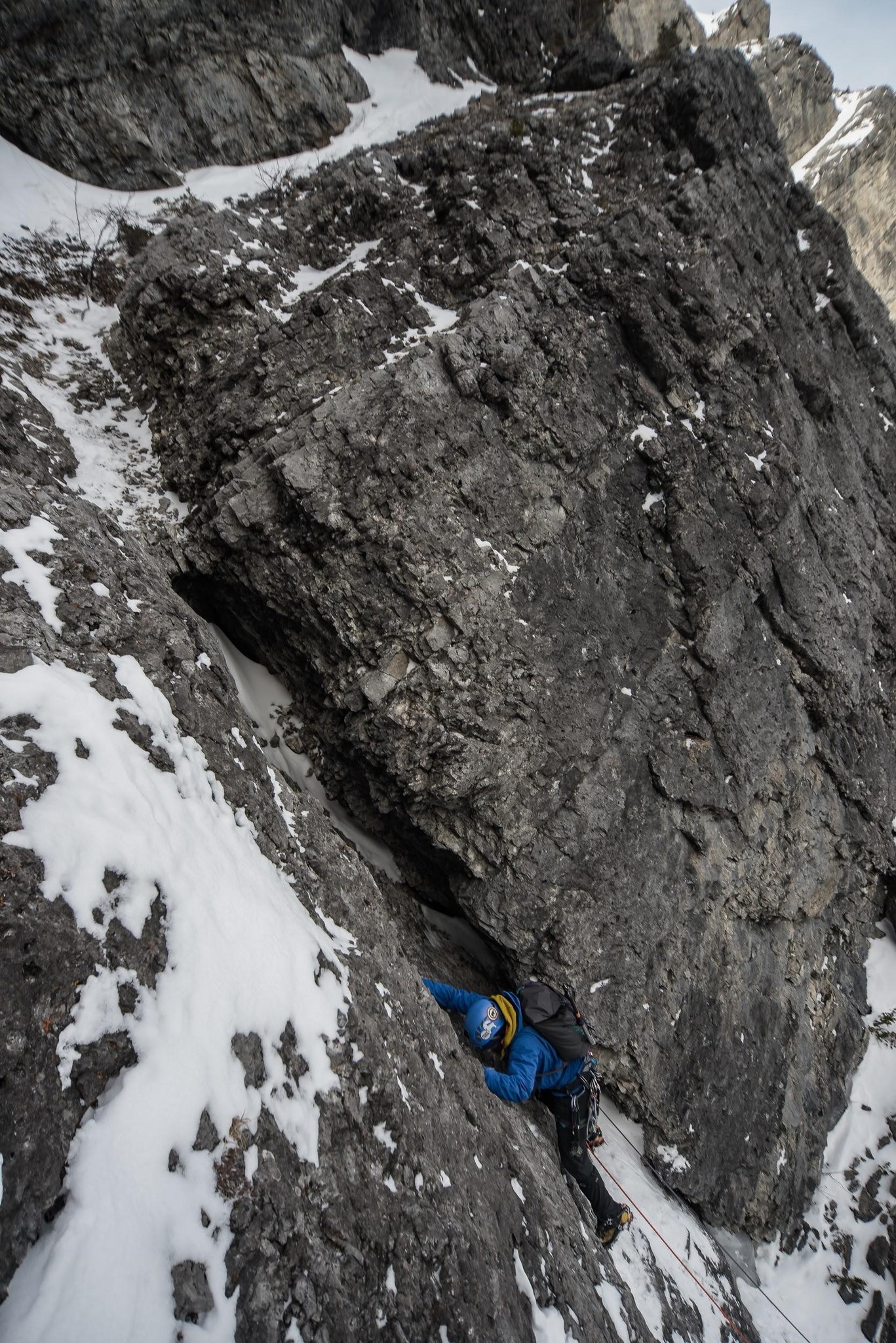 Ice, trad, route finding, and a true summit to top off the 700m day. For some of us, time spent honing our skills at the crags are in preparation for days like these. With low to moderate difficulty, a wide range of necessary skills needed, and a full day adventure, Coire Dubh Integrale makes for a great introduction to alpine climbing. 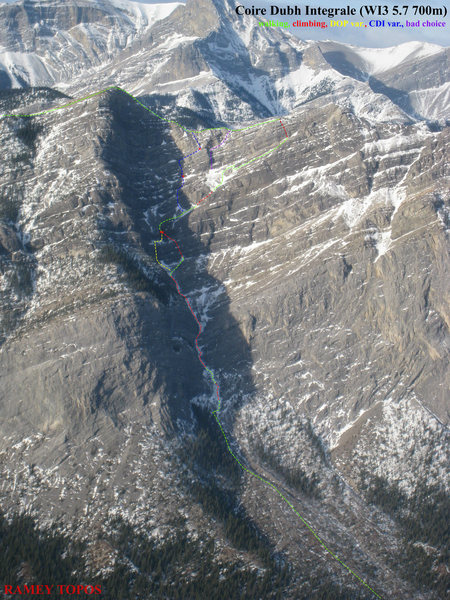 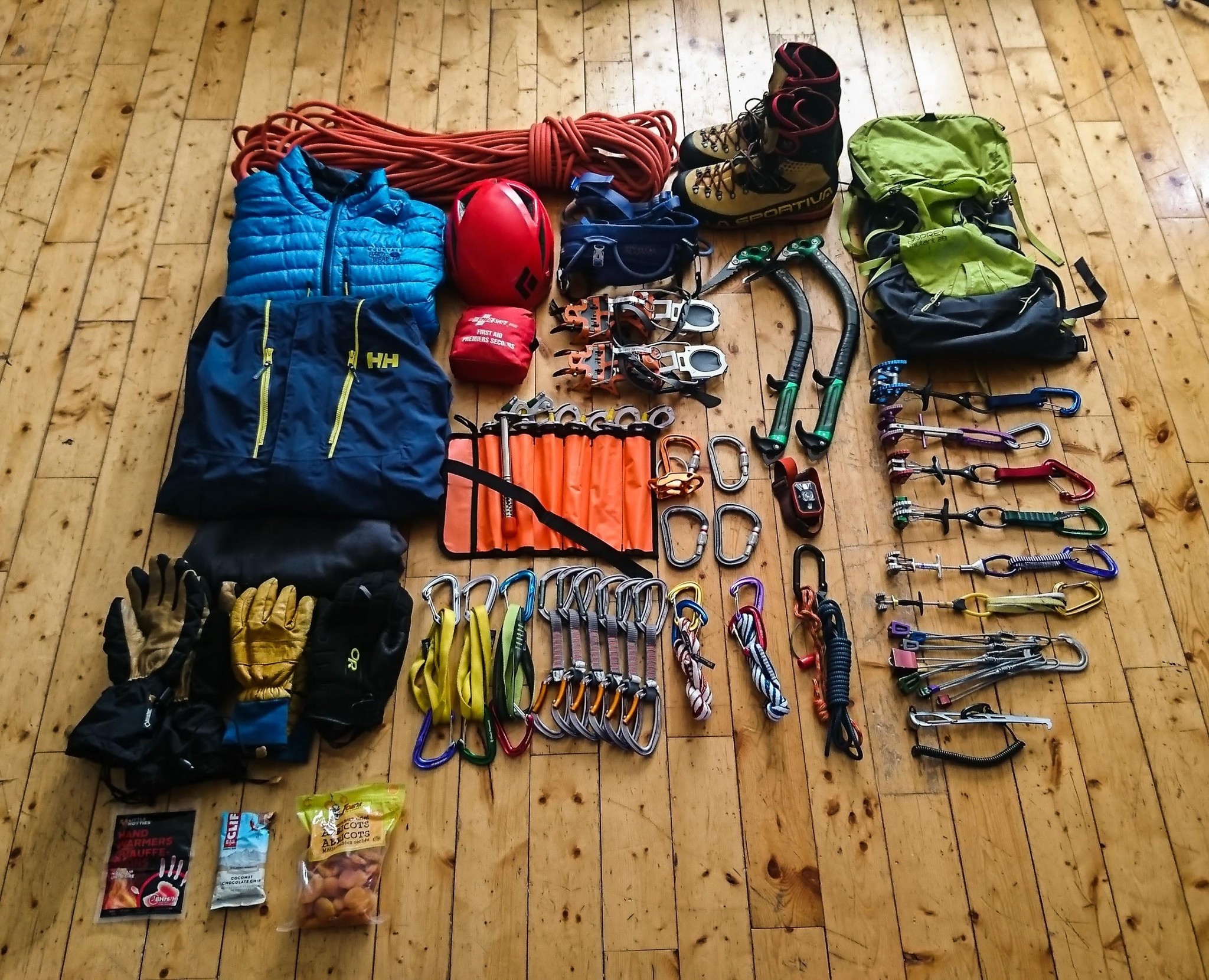 There was no big surprise when we forced our doors open into the full force of the prairie winds that seem to frequently sweep the area along the front ranges. Parking in the paved lot across from the landfill, about 2 km or so east of Exshaw, we started our early morning approach with hoods over our heads, and lamps illuminating not much more than clouds of dust being thrust in our face by the wind, hoping conditions might be better in the shelter of the drainage we were heading for. 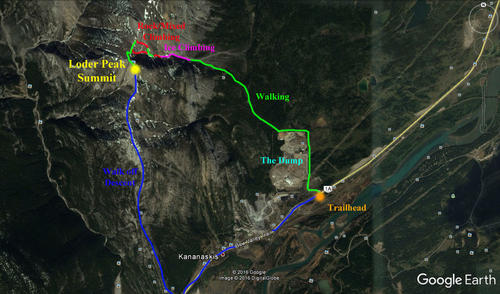 For the approach, walk across the road and head towards the landfill, taking the climbers trail along the east side of the fence and around the back side of the landfill. Head NW from there on what should be a well-established trail, making sure not to turn off too early and head into the wrong drainage (this seems to be a common occurrence).

This pitch forms fat and wide offering some steeper ice up the center or some more mellow WI2 options on the sides. Though the rest of the climb didn’t seem to see any sun, this first pitch was getting the full brunt of the sunrise, which was evident as it reminded me of the same rotten ice you’d get on something like melt out. The top out has multiple anchor options. 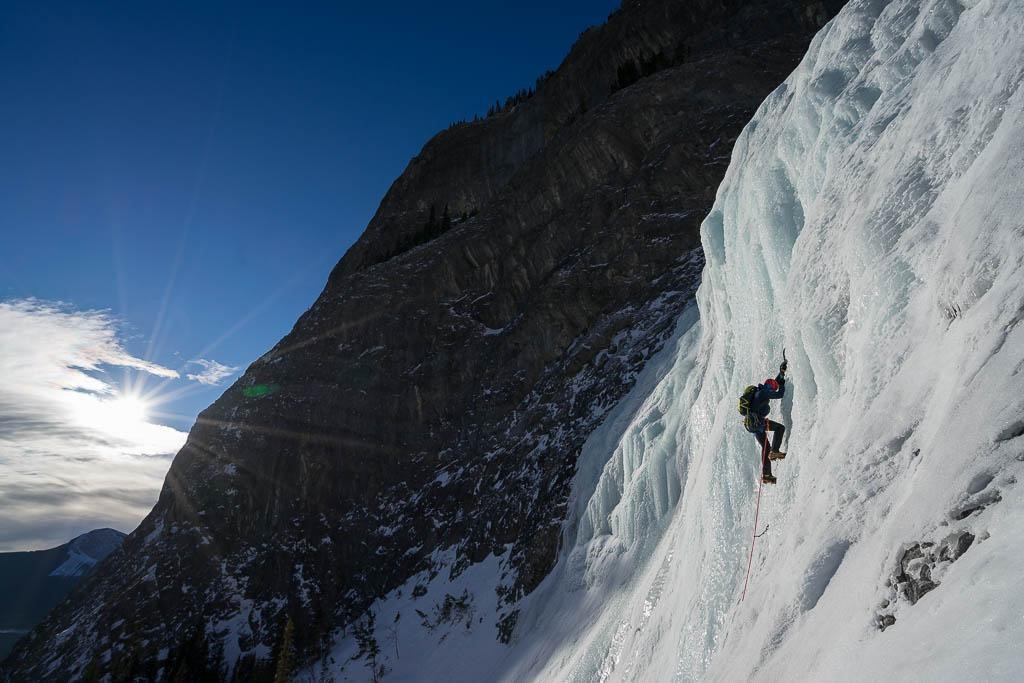 Making a few mountaineer coils, we decided to simul-climb the next couple hundred meters to the rock pitch, as it mainly consisted of boot-packing wind packed snow with the odd bit of rambling ice throughout. 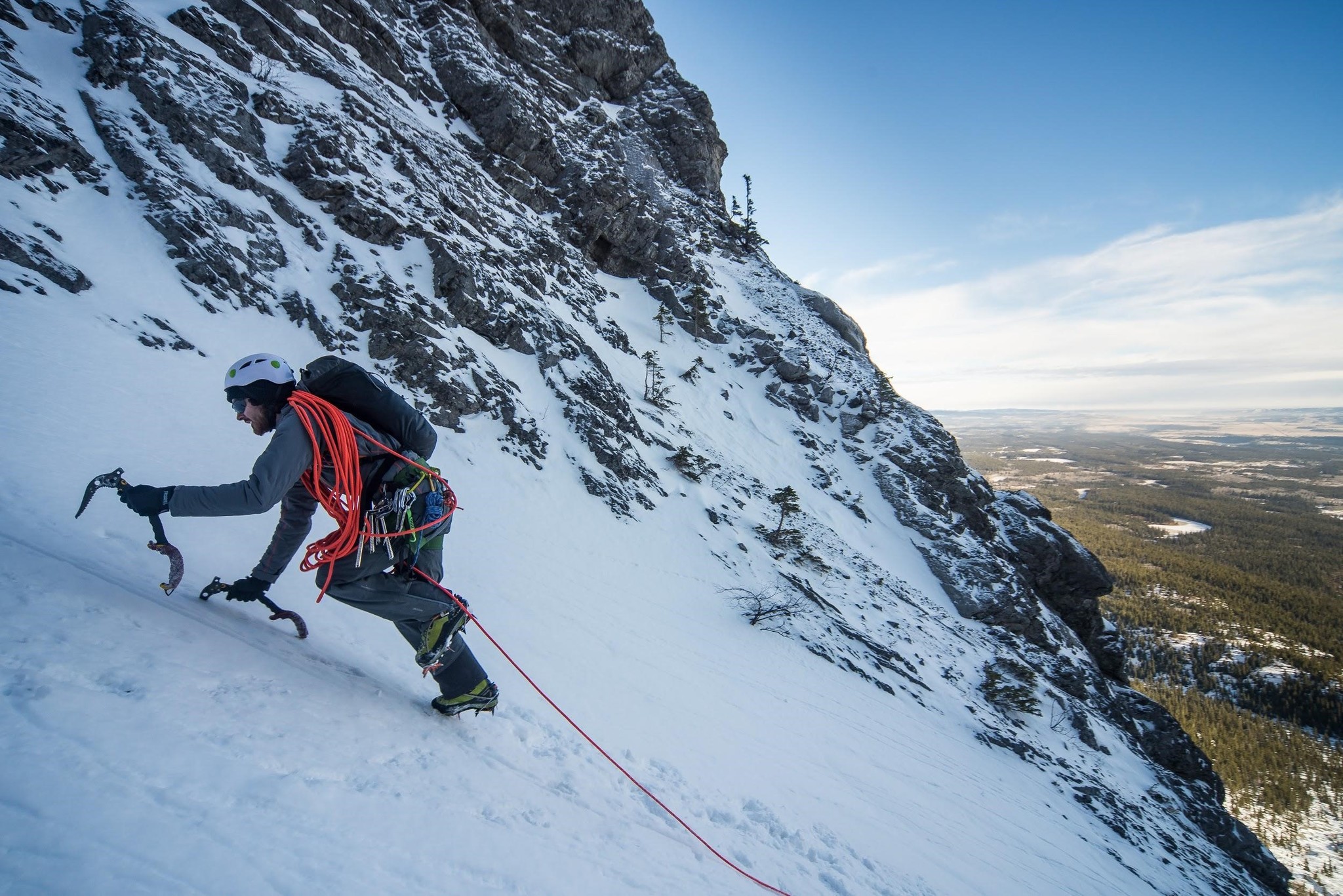 We reached a short step of WI2 ice that was about 8m or so just below the rock pitch. We decided to carry on simul climbing through this, however, some may decide to pitch it out deciding on comfort level.

Climb the left facing corner at the right of the face to a tree anchor. Not being a strong mixed climber, this was the pitch that had me anxious, however, it really never felt more than 5.7 with crampons on. This low angle slab is full of pockets and features that make climbing with gloved hands or tools a breeze. A few nuts and a few cams protected this pitch well. 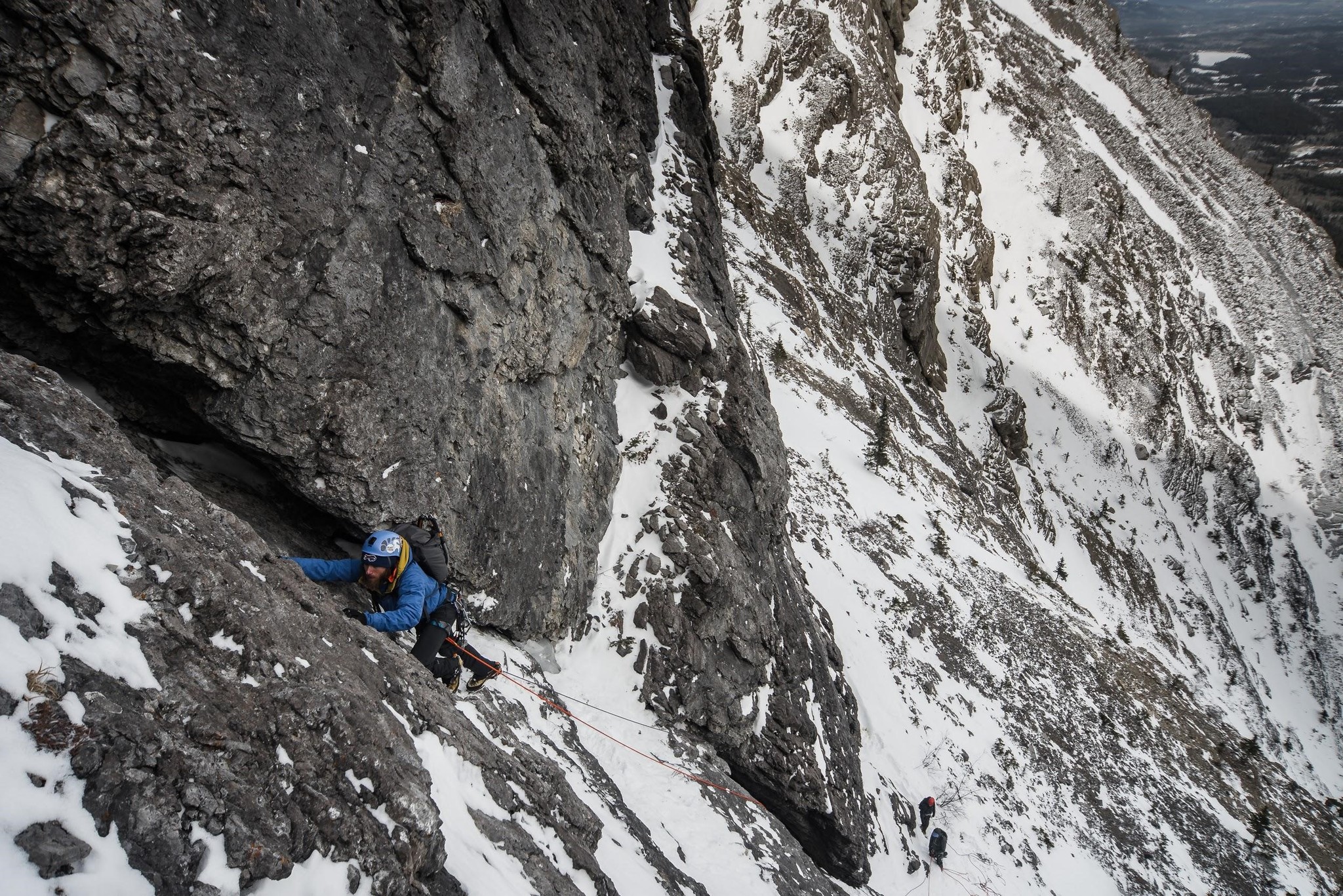 A short scramble to the left of the climb brought us to the next snow-covered scree slope. Having not planned to take the direct route, we headed right up some more rambling ice and snow. 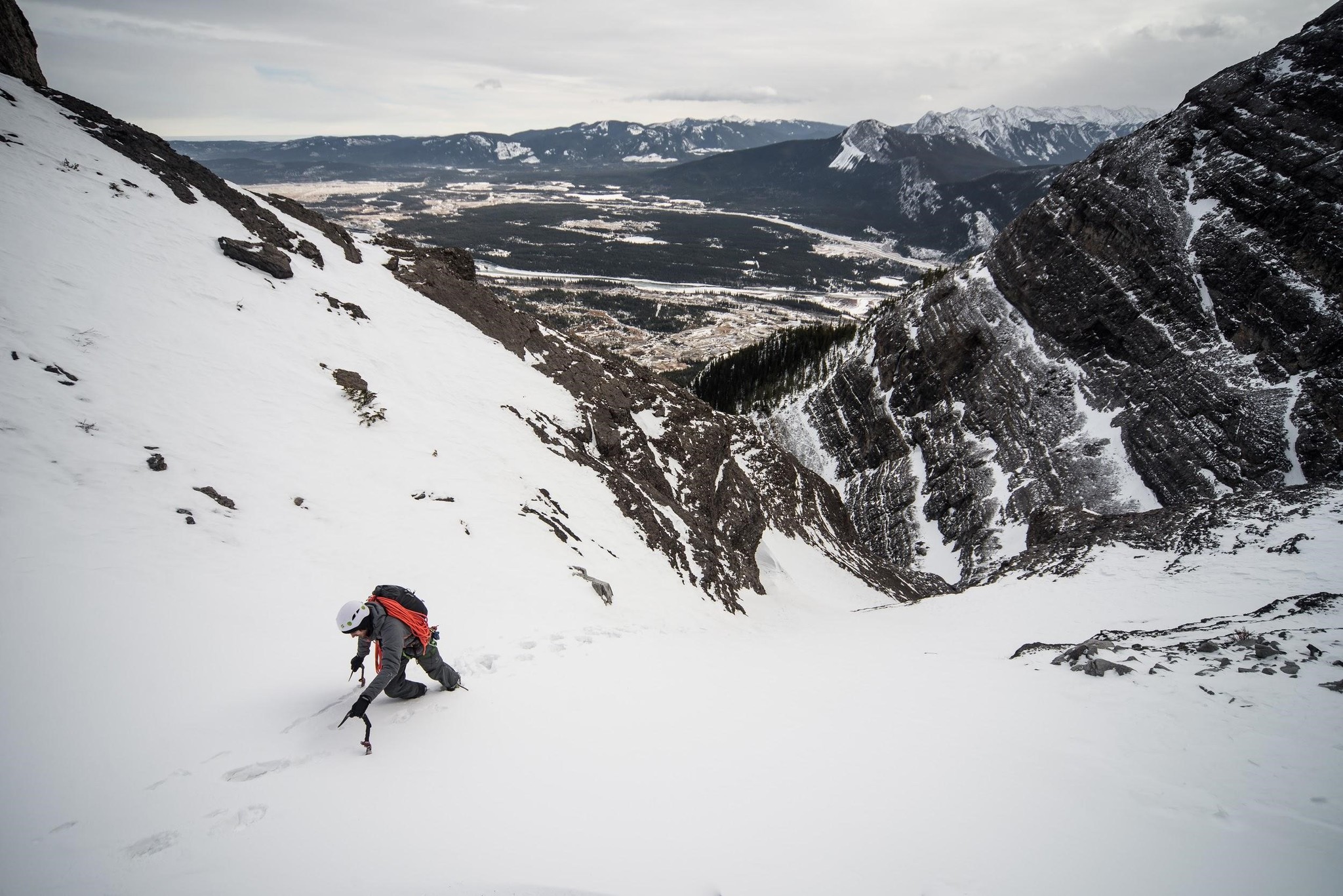 A couple hundred meters later, we saw our obvious exit through a gully to our left. Our topo described this section as a climb, however, a short stemming section that could’ve made its way into a guidebook of scrambles brought us onto a final scree slope to the summit ridge. 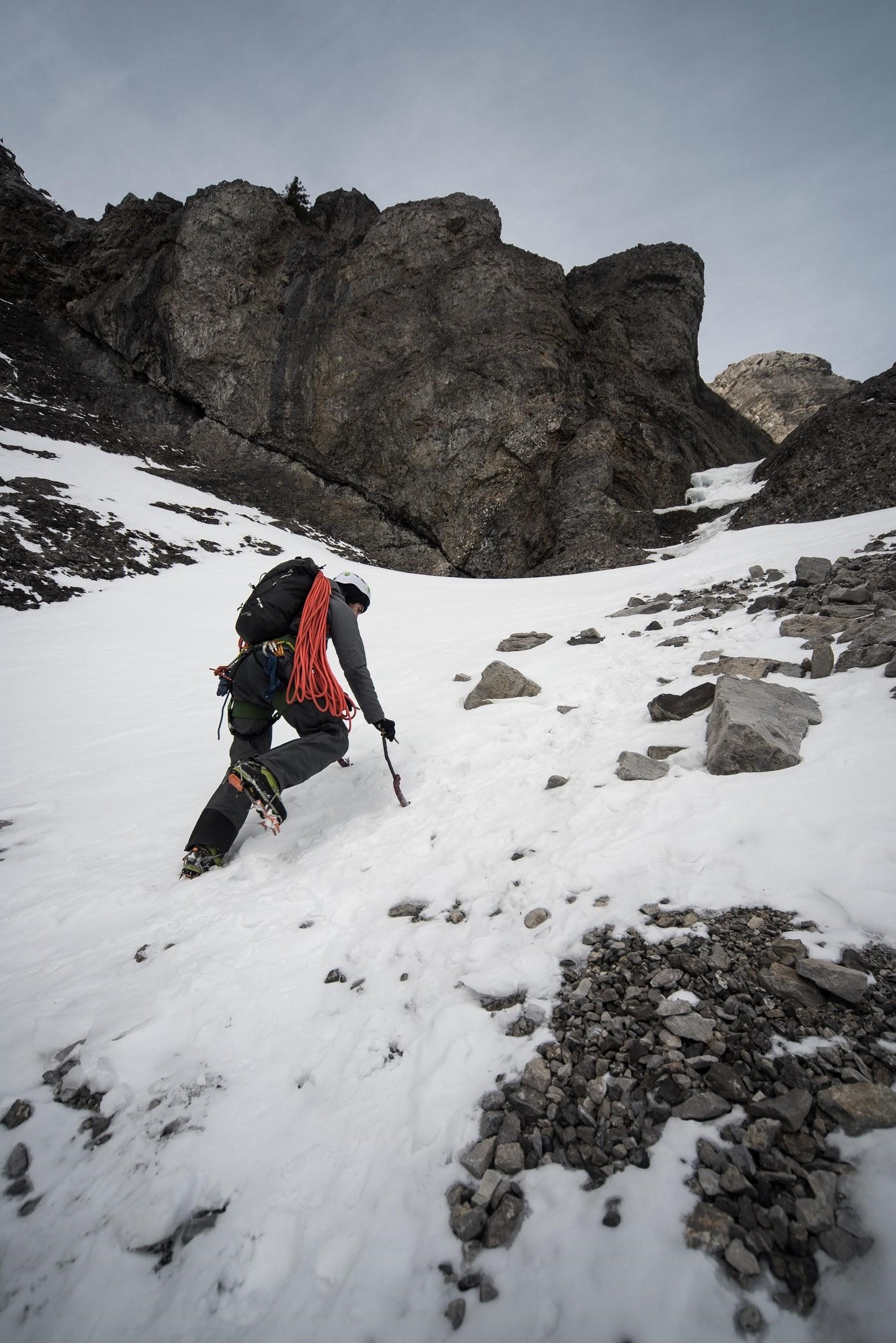 The descent was pretty straightforward, scrambling the ridgeline to gain the summit of Loder Peak, and following the obvious hikers route down to the highway. Though the drainage gave shelter from the earlier mentioned winds, be prepared to meet them again on the ridge as it is notorious for being extremely windy most of the time (this becomes quite evident when looking at the trees missing their western branches). Leaving a second car at the bottom of the descent may seem pointless at first, but future self will thank you after the long walk off the summit.

All in all, this route makes for a great day out if you’re looking to try your hand at becoming the next (less extreme) Ueli Steck, with all of its fast-paced (depending what kind of shape you’re in) moving up snow and ice slopes, with a chance to swing some tools and place some rock gear along the way. As an added bonus, climb later in the week and head down the road to the Stoney Nakoda Casino for their dinner buffet to recover all those lost calories afterward.