By making adjustments to things I thought were necessary, or previously considered too insignificant to matter, I was able to shave almost 1kg (3 lbs) when all was said and done while adding more to my rack! ( 10 minutes read).

Forged Friends, technical friends, a couple of old brass head quad cams, and a DMM #4 4CU. Jeweler's wire had taken the place of the original trigger wire on a few, and some slings with webbing tied off with water knots. As old and manky as it was, this rack, supplemented with a few newer BD Camalots and a set of nuts, had served me well as a trad climbing noob. 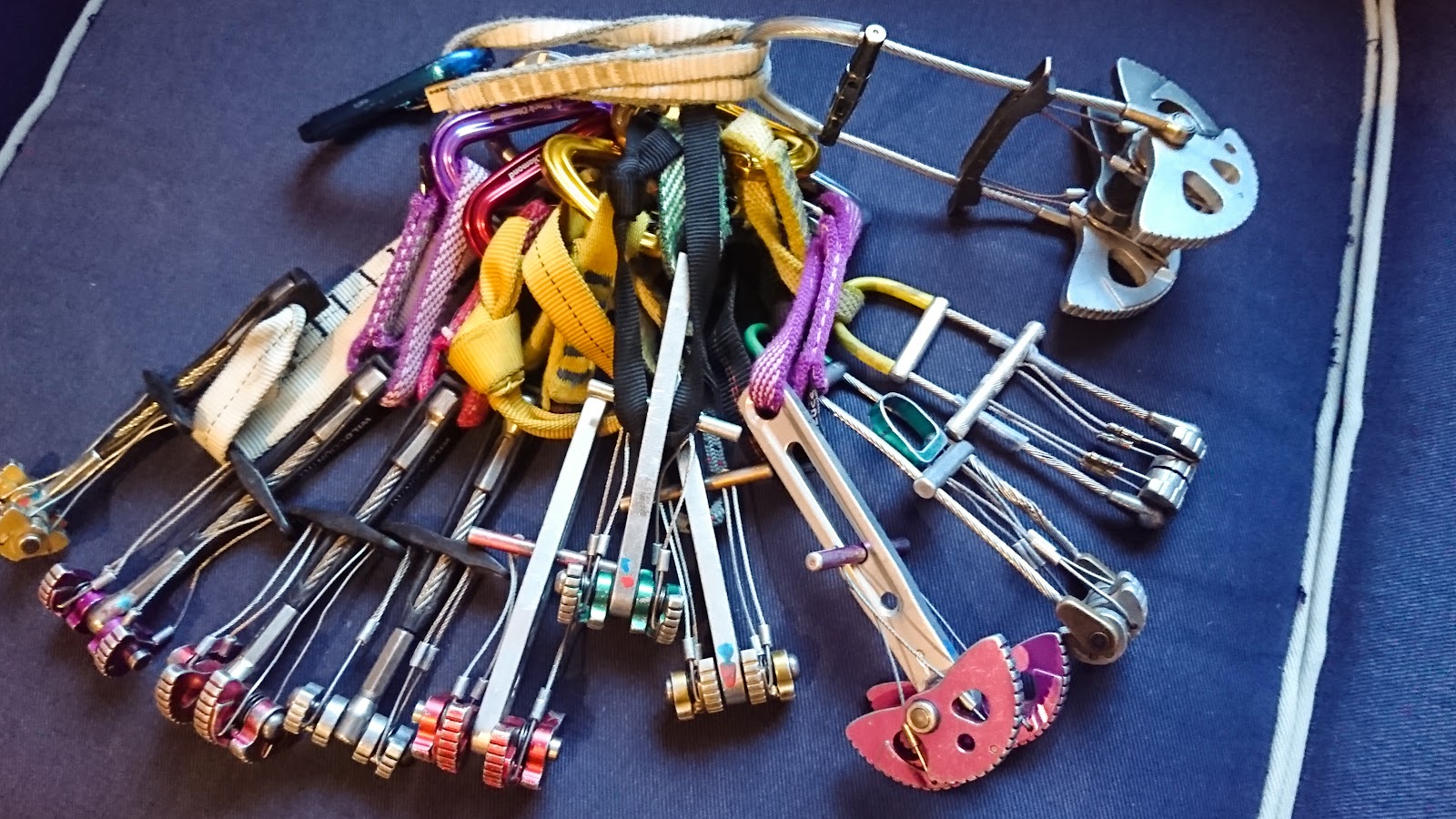 I dug through the closet in search of gear for a quick weekend burn to Skaha should a weather window arise and there they were. My old “friends”. With another season of rock just around the corner, I decided it was time to say goodbye and upgrade to something a little more confidence inspiring for the adventures to come. Having more experience and mileage under my belt now, I had a better idea of what I wanted out of a new rack, and where I was willing and unwilling to make compromises. Weight and affordability were major priorities for me, with a few other features that played into the final decision of what the new rack is now comprised of.

Though shiny new cams are nice, and the right ones can help shave a few grams, in the end, the most drastic weight cuts were done by completely rethinking my systems and making minor tweaks here and there. By making adjustments to things I thought were necessary, or previously considered too insignificant to matter, I was able to shave almost 1kg (3 lbs) when all was said and done while adding more to my rack! 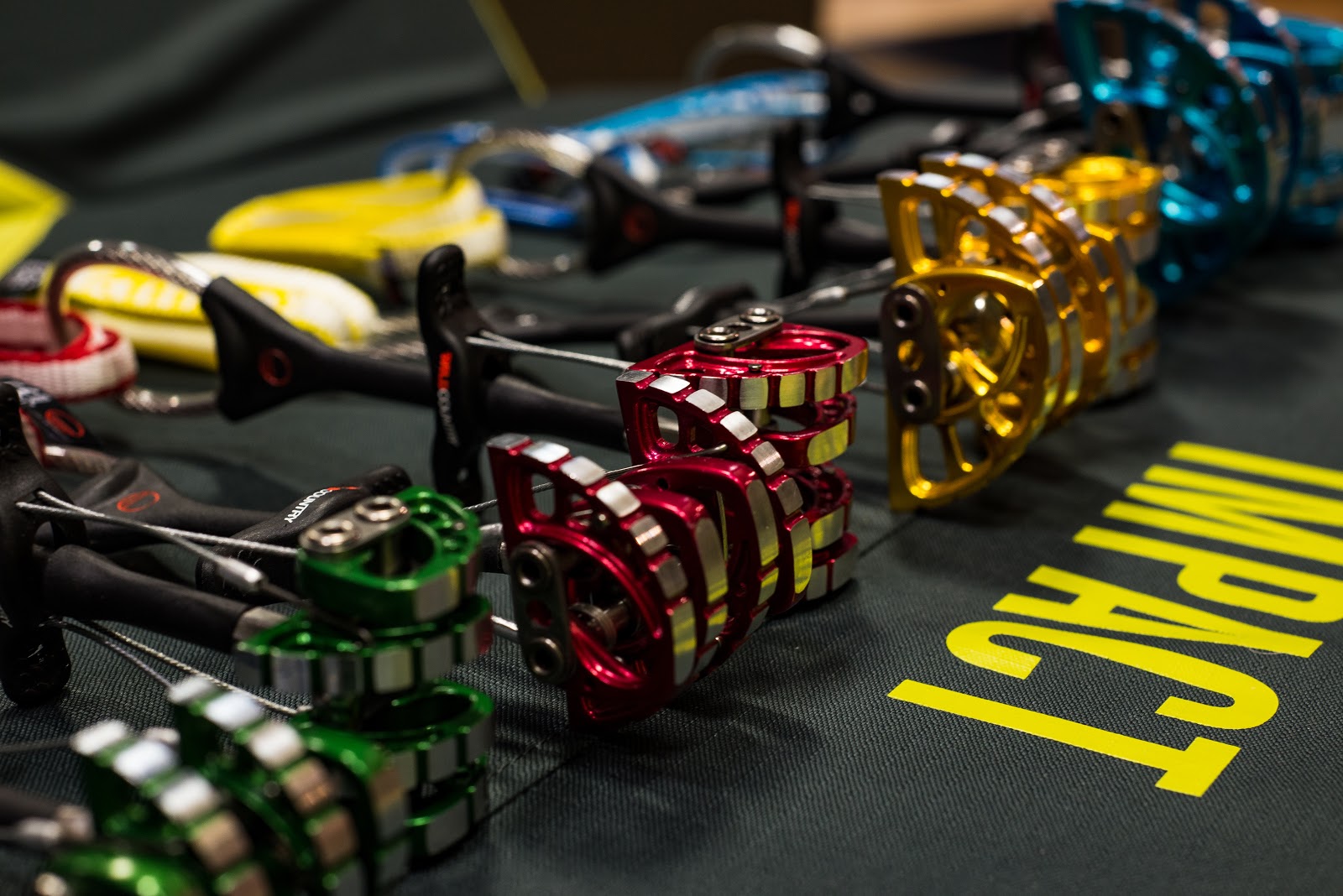 After looking at C4’s, Ultralights, Dragons and so on, I decided to double up on the New Friends from Wild Country for the  #0.75 - #3 sizes. I didn’t bother with the smaller sizes since the larger micro cams overlap into the #0.5 range, but weigh in a bit lighter and have a narrower head profile. Significantly updated from the previous Technical Friends on my old rack, Wild Country’s New Friends feature double axles, a thumb loop, extendable slings and wider, machined raw aluminum lobes for better purchase on soft stone. Though not as light as the BD Ultralights (which will lighten your wallet as much as your rack), they are one of the lightest options on the market coming in at about 10 grams lighter than the comparable Dragons or C4’s for the midrange. These numbers don’t sound significant on their own, but we’ll see how these small numbers up to a significant weight reduction quite quickly. Extendable slings were a big one for me since it means leaving more quickdraws (more weight) at home without the headache of rope drag on those wandering routes that don’t necessarily call for a shoulder sling. The DMM Dragons offer this, as well as their machined “triple grip” lobes, but at the cost of a thumb loop, a few grams for the minimalists, and a financial blow for some. 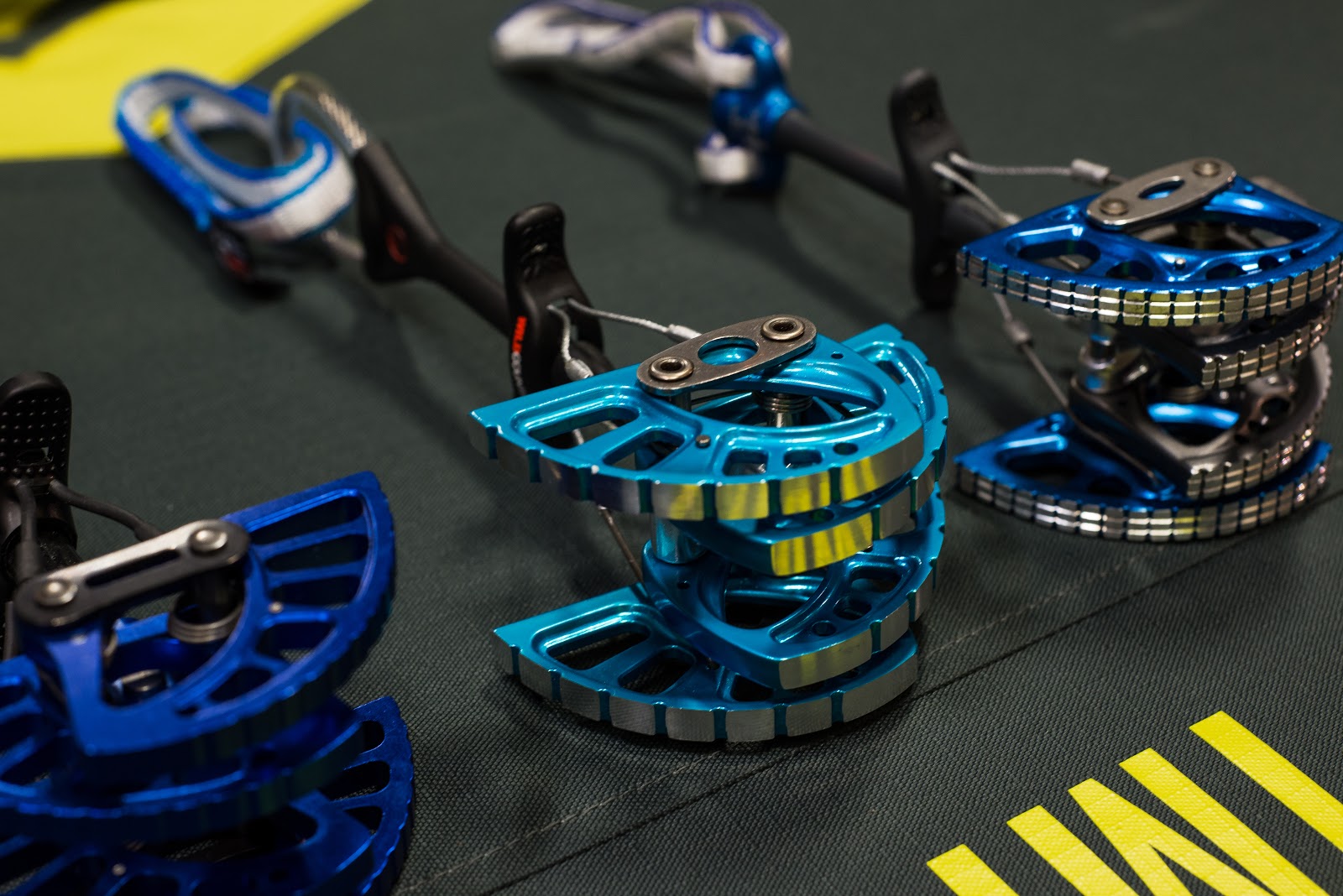 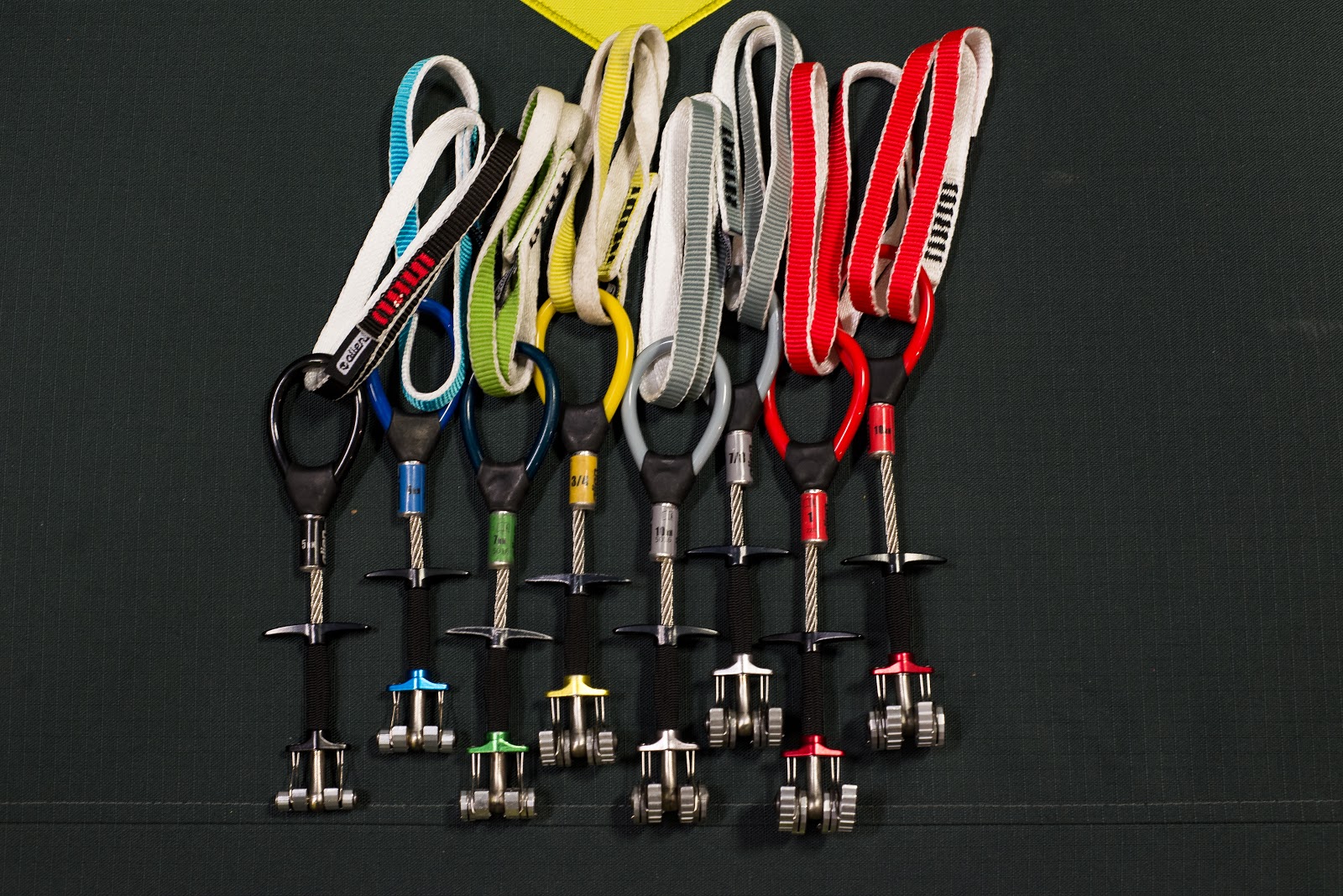 The micro cams were a no-brainer for me after having picked up a yellow alien revolution last summer and confidently finding it a home on every climb since. Lightweight, ridiculously flexible stem, extendable sling, and a narrow head profile that can open up many more placement options makes this my absolute favorite cam on the market. With a similar head profile and flexible stem, the Black Diamond X4’s are worth taking note of, however, the Alien’s lobes are of a different construction, have a narrower head, and come in on the lighter side for a full run. The lobes of the Aliens are built with a softer alloy, making them less durable on one hand, but on the other giving it that extra bit of bite into the rock, which is by no means a bad thing when we’re talking cams this small. When it comes to weight the X4’s come close in the smaller sizes, but as the size increases, the weight does so significantly in comparison to the Aliens and by the end of a full run we’re talking 91 grams for the #0.5 X4 vs the 61 grams Red Alien. When doubling up, that's an entire cam in weight savings for the 0.5 size alone! 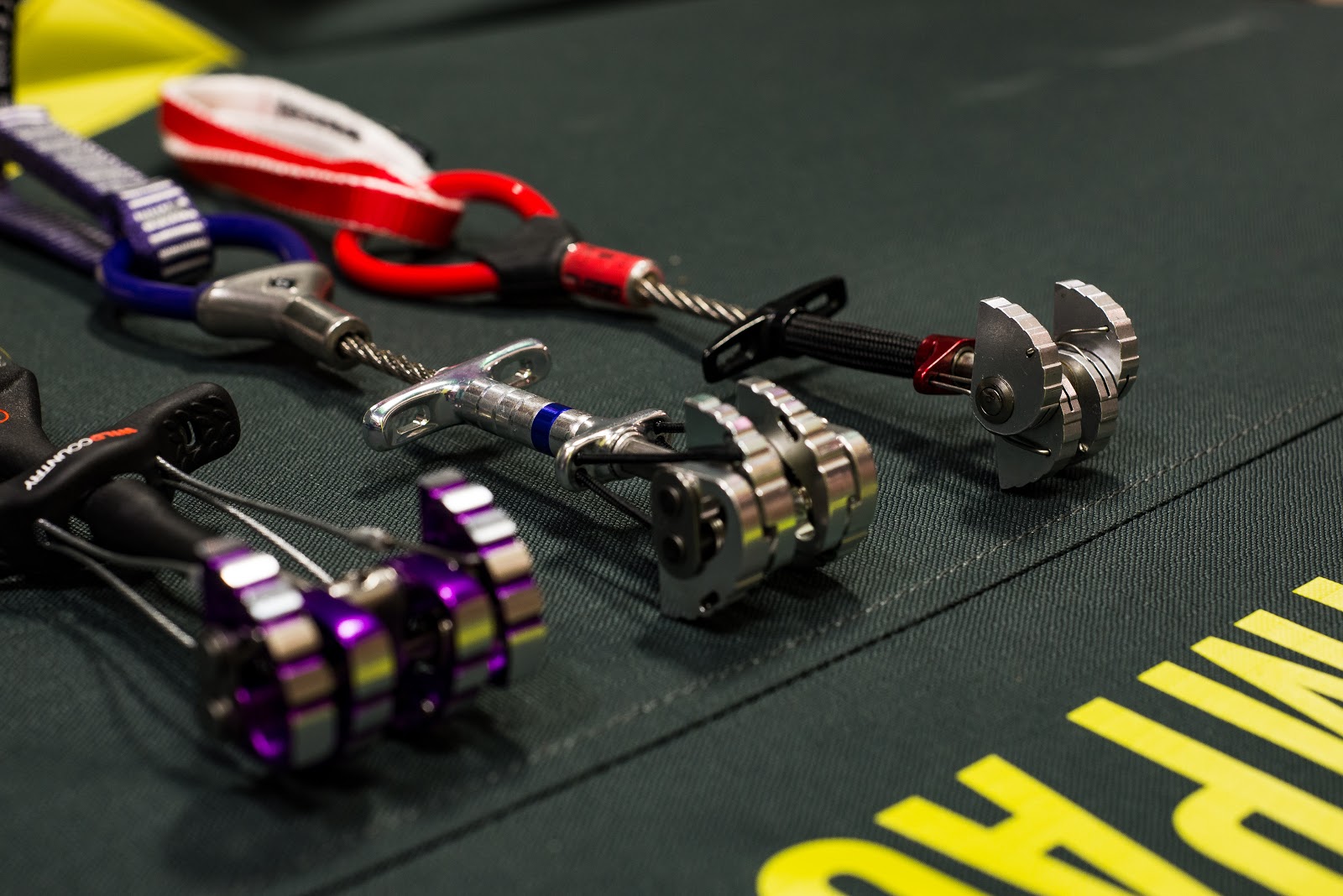 The flexible stem not only makes for fantastic placements in horizontals, but I’ve even found it to make a great first piece where possible. Normally, when a cam is placed, it is angled slightly down in the anticipated direction of pull. However, as the rope tightens when the leader falls or asks for a take, this will pull the cam outward towards the belayer rather than down causing the first piece to walk up and possibly compromising the placement. This can be avoided by clipping with an alpine draw on the first piece of protection at the cost of a longer fall of the start (which could lead to decking). With a cam such as the Alien, however, the stem flexes out as the rope tightens while the head stays in place without the use of a longer sling. 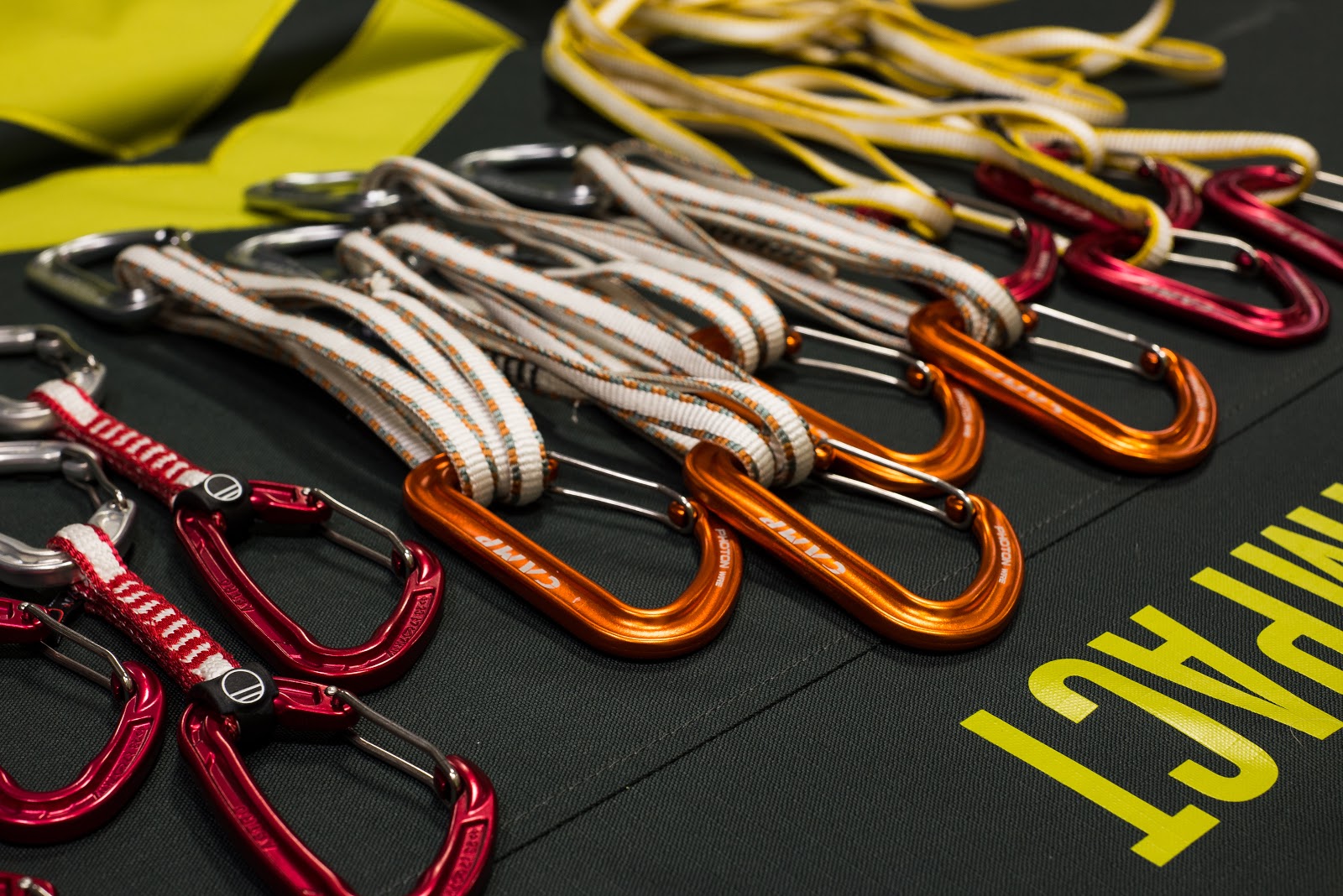 While picking out all of the new 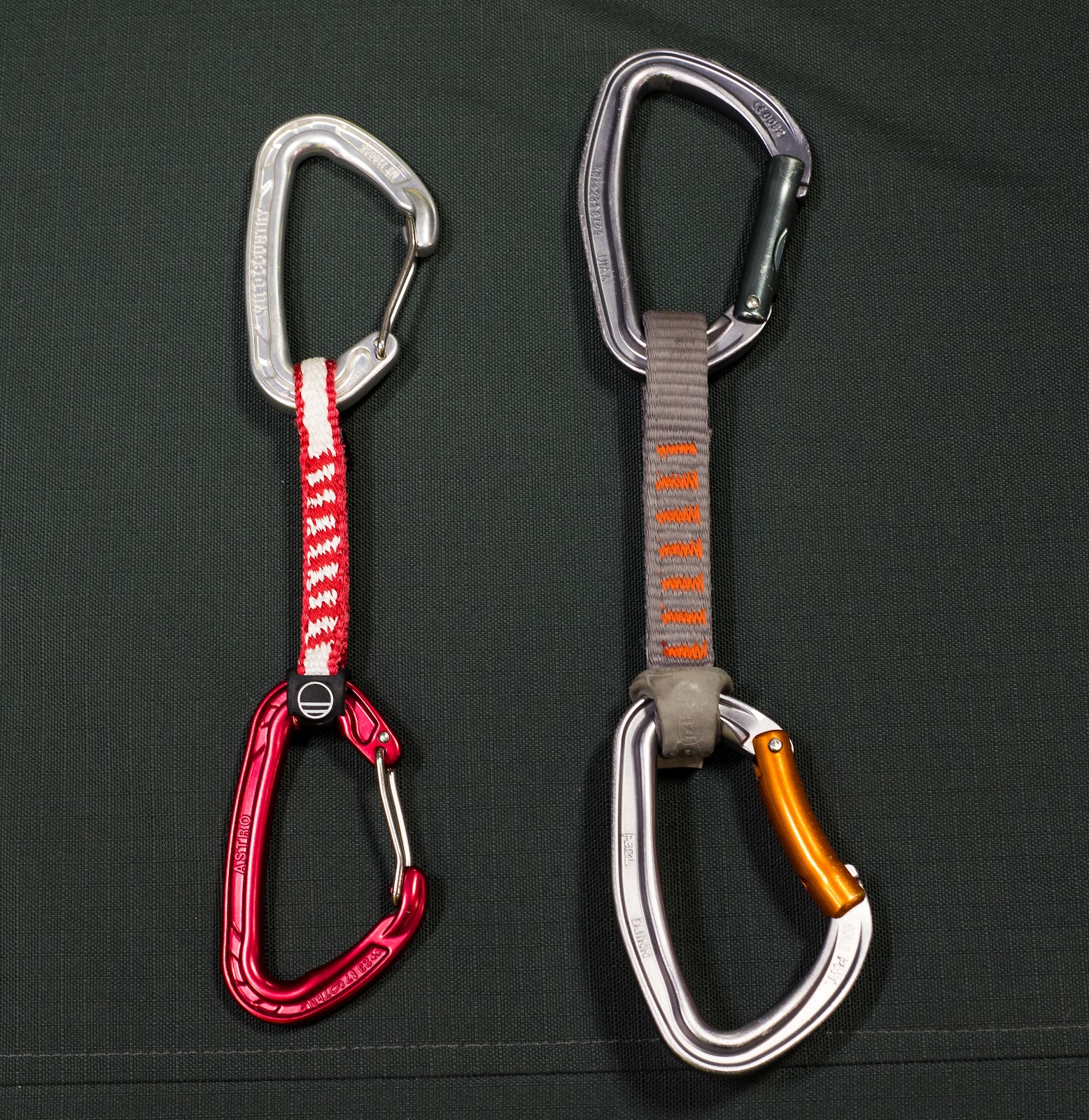 pieces, I remembered the long strenuous walk into the Bugs (not to mention the longer approaches of the Rockies). Only having saved 184 grams with the new cams, I decided to continue my quest to reduce weight where I could. So I took a look at draws, slings, and biners next. I’ve always been in the habit of extending my pro by a quickdraw at least, in order to reduce rope drag and cam-walk. Therefore have always brought along a rack of draws and a few extendable slings. However, at 106 grams per Petzl Djinn, and 110 grams per 60cm nylon, with two BD hoodwires, continuing to bring my 1.6 kg rack of “do everything” sport draws was less than ideal. Now, this is where the extendable slings on the cams come into play, no longer necessitating the use of draws on every placement and allowing me to leave my hefty rack of sport draws behind. Instead, I opted for only a handful of the ultralight Wild Country Astro draws, at 65 grams a piece, that I'll be using for nut placements and the odd bolt or piton I encounter en route.

For climbing splitters in Squampton, this is often all that’s needed (plus a shoulder length runner or two for good measure), but in the Rockies this is obviously not enough as odd pro placements, wandering routes and ledges often call for use of shoulder length slings to reduce rope drag. To supplement the four quickdraws, I decided to go with four CAMP Mach Express extendable draws and four shoulder length Dyneema slings complimented by a single lightweight biner on each. 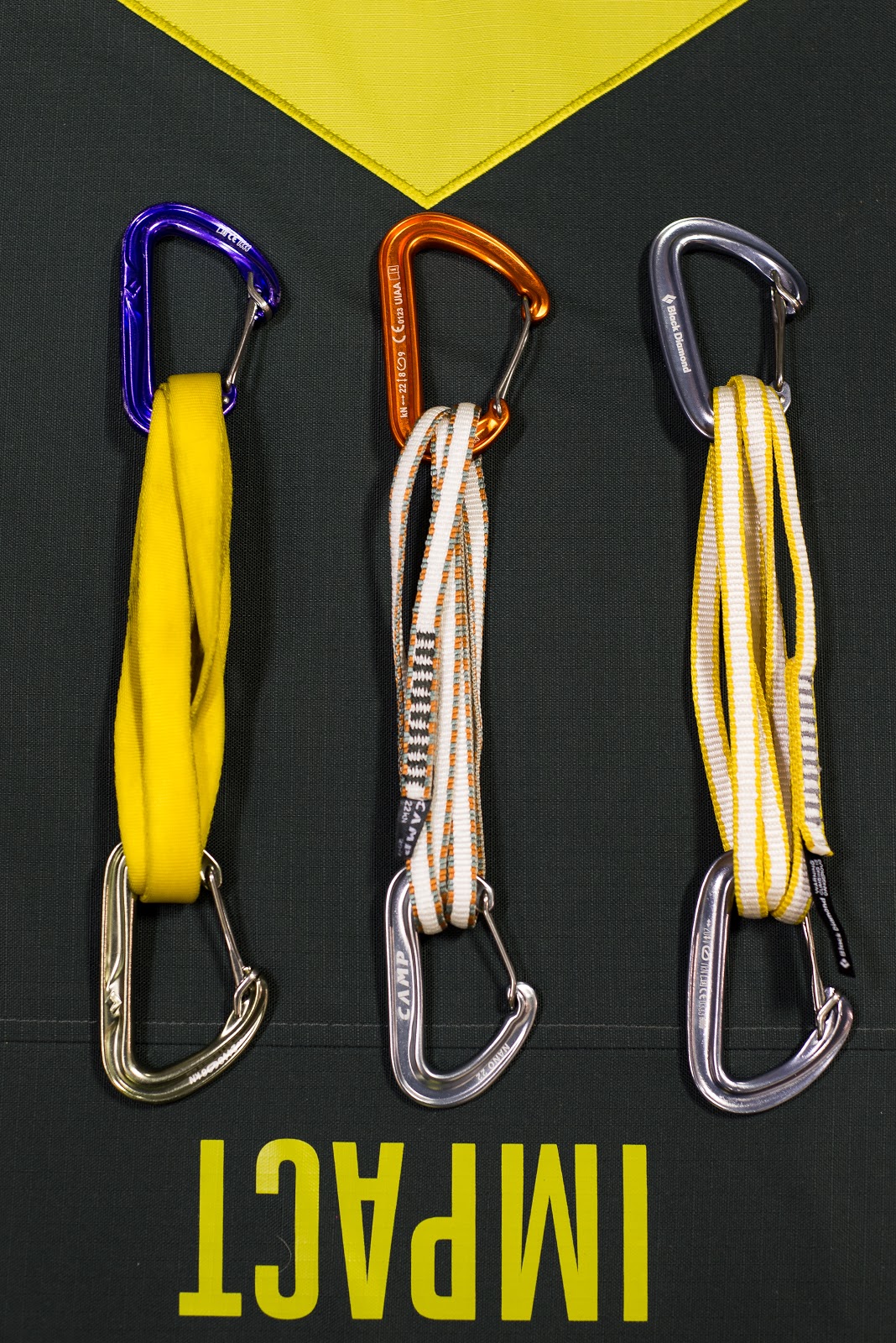 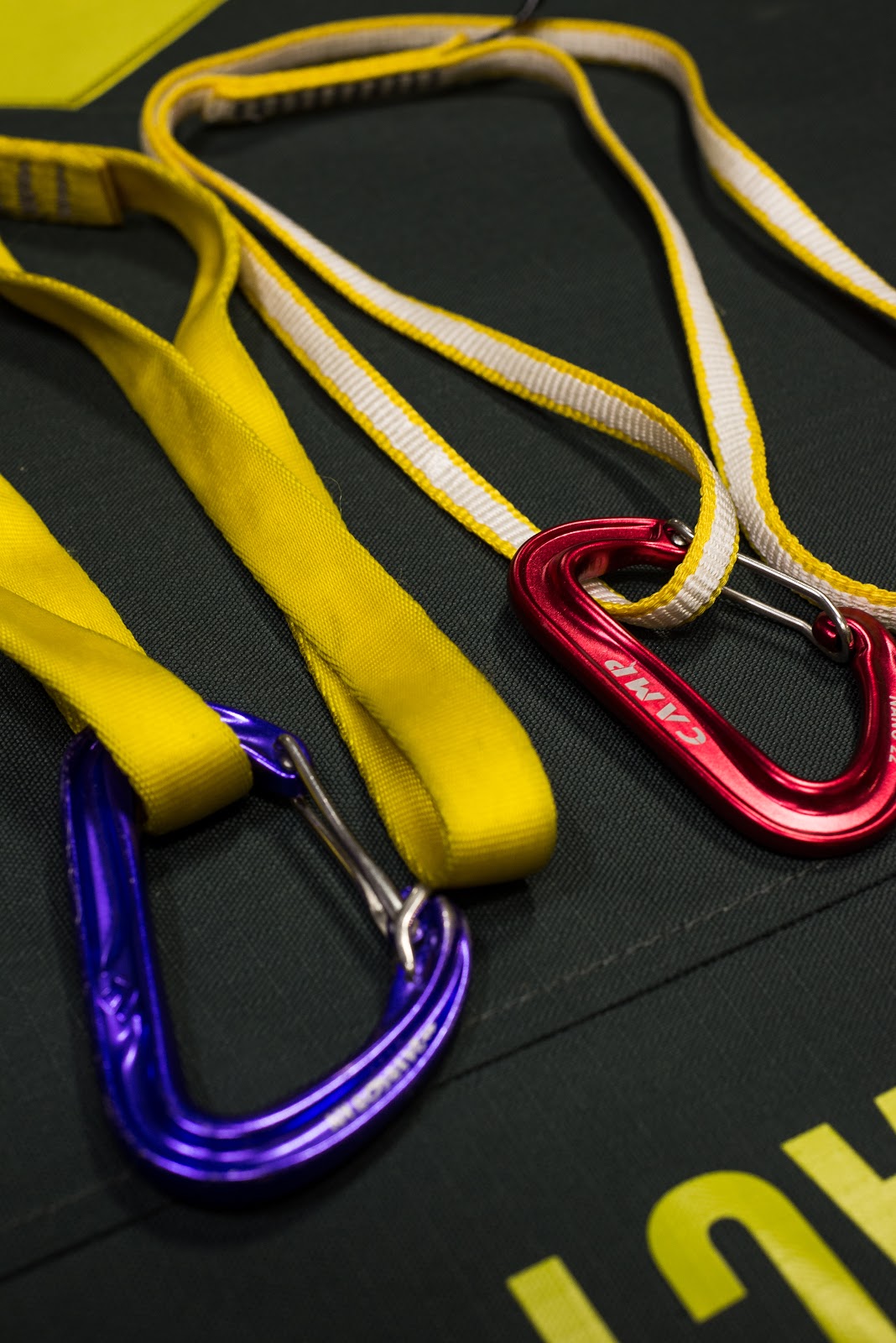 Coming in at 70 grams a piece, the Mach express weighs slightly less than Black Diamond’s similar Oz alpine runner. Though it lacks the hooded feature of the Oz set, the Mach Express benefits from having CAMP’s full size photon biner for ease of handling on the rope end, and their smaller nano 22 on the other in order to keep weight down, as well as reduce overall size making them more packable and more rackable. With the entire kit being overhauled, it didn’t make sense to continue using nylon runners for shoulder slings with Dyneema being more packable and significantly lighter for only a few extra bucks. Having used 60cm nylon runners with a BD hoodwire biner as a shoulder sling in the past, I was able to save 16 grams a sling and 15 grams per biner by going to Dyneema paired with a CAMP nano 22. 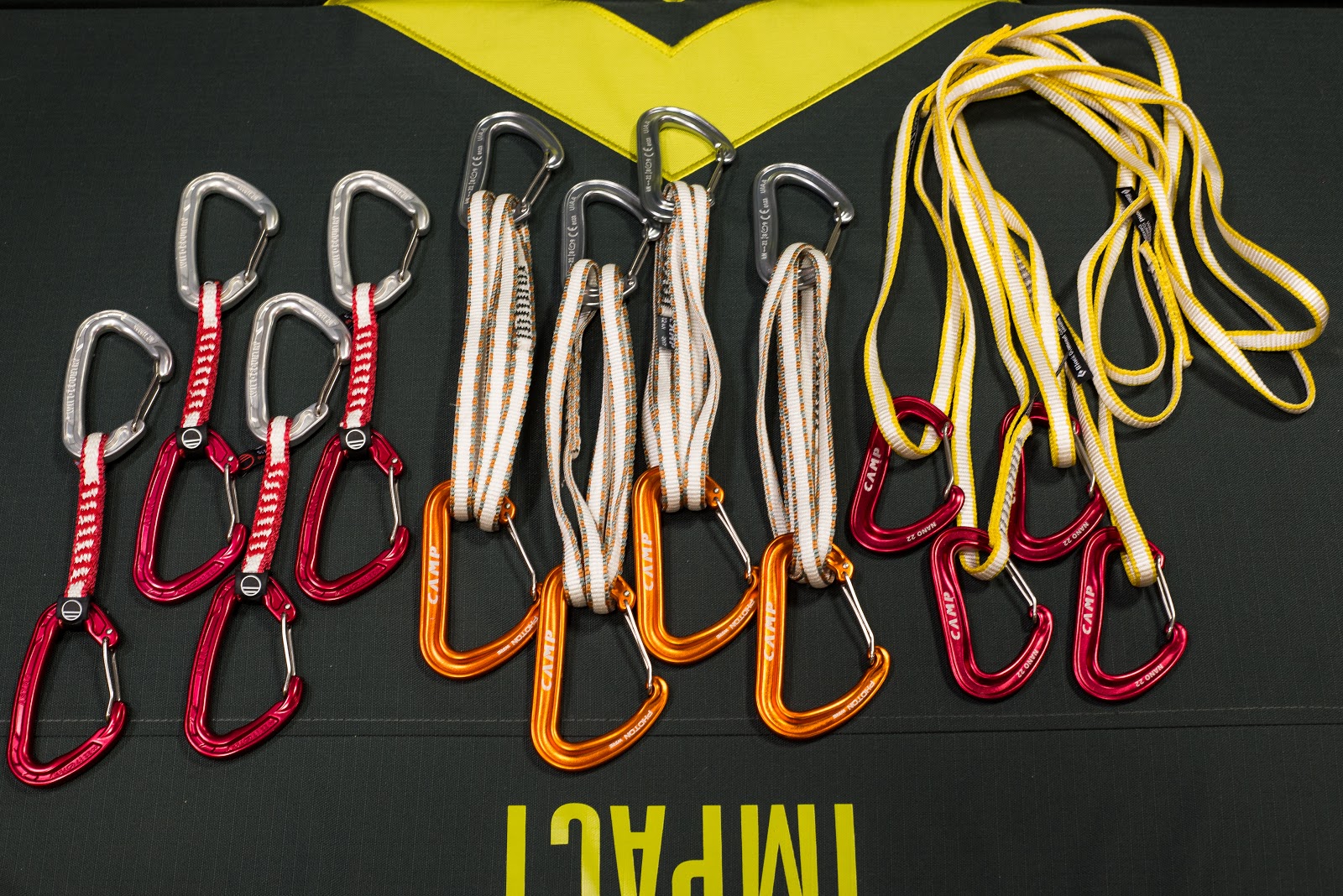 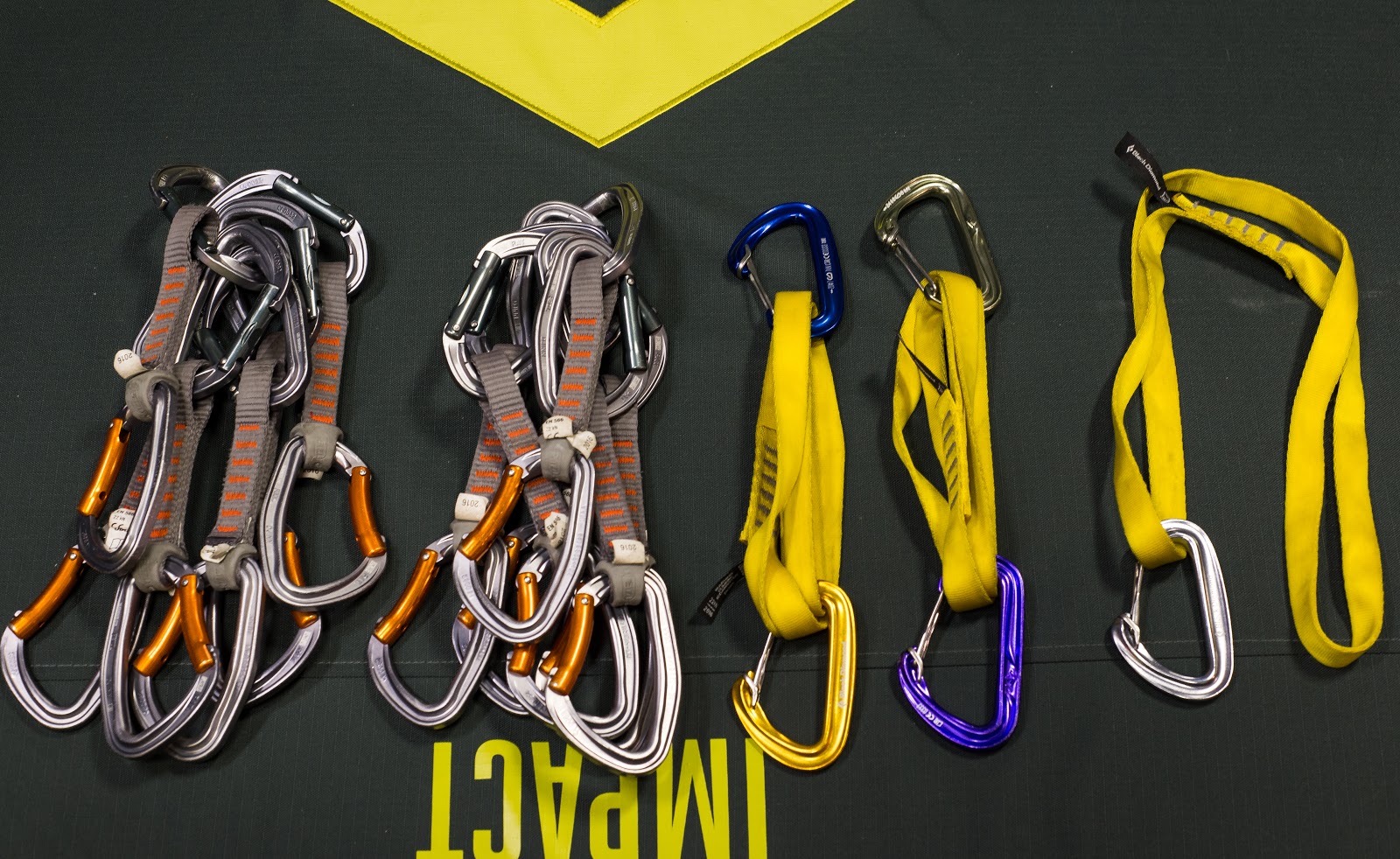 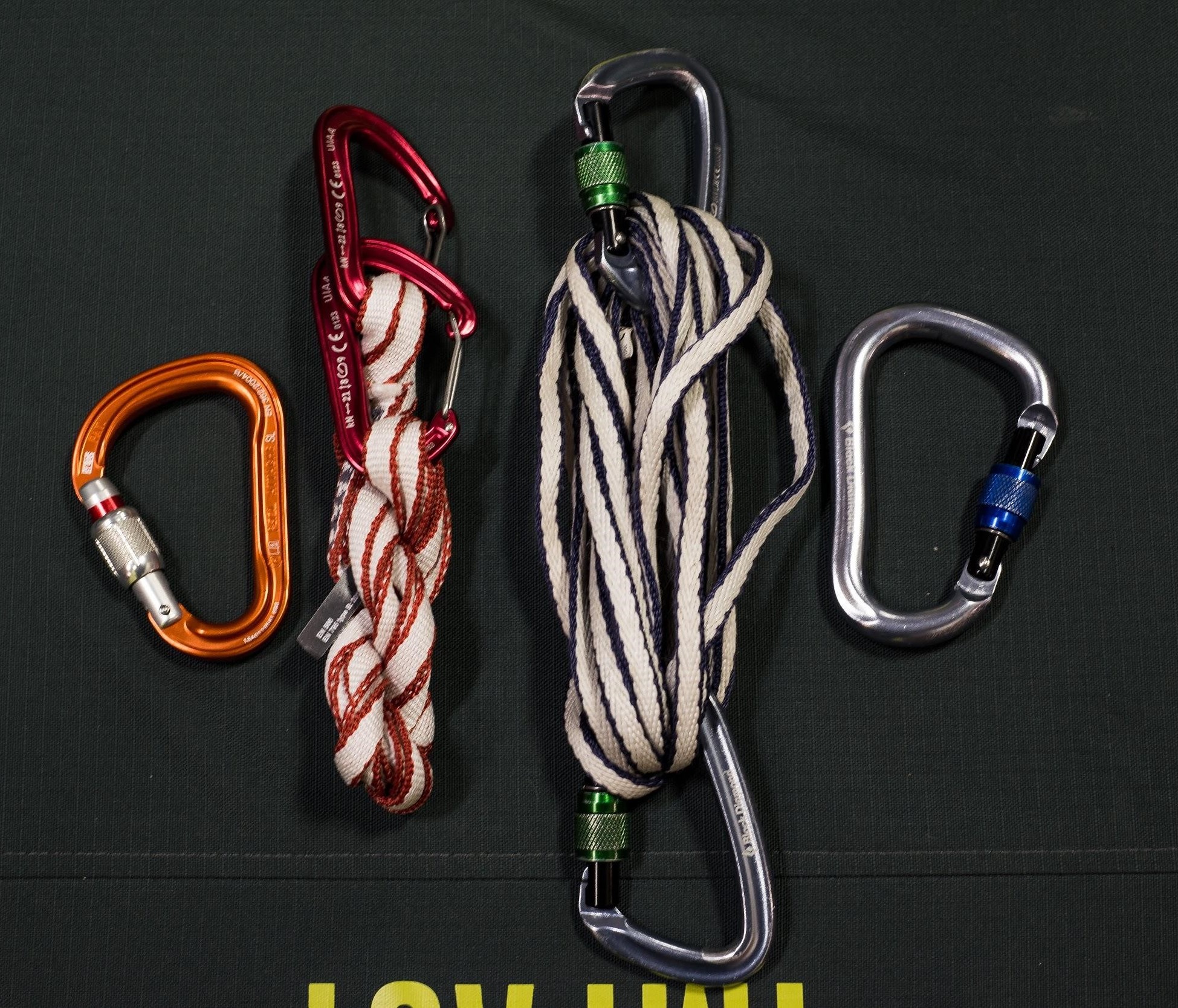 As a bit of a bonus, there were still two other items in my kit I decided to update: My anchor and racking biners. Having learned a few anchor building techniques from a local guide, I decided the 240cm sling was no longer necessary, nor were the amount of lockers I was bringing along. I traded out the 240cm for a shorter length sling, some lockers for non-lockers, and my BD Rocklocks for the lighter/sleeker Petzl Ange lockers. Other commonly overlooked items are racking biners. Having previously used Black Diamond Hoodwire’s, making the switch to a lighter carabiner such as the Nano 22 from Camp, I was able to save up to another 200+ grams for just 16 biners! 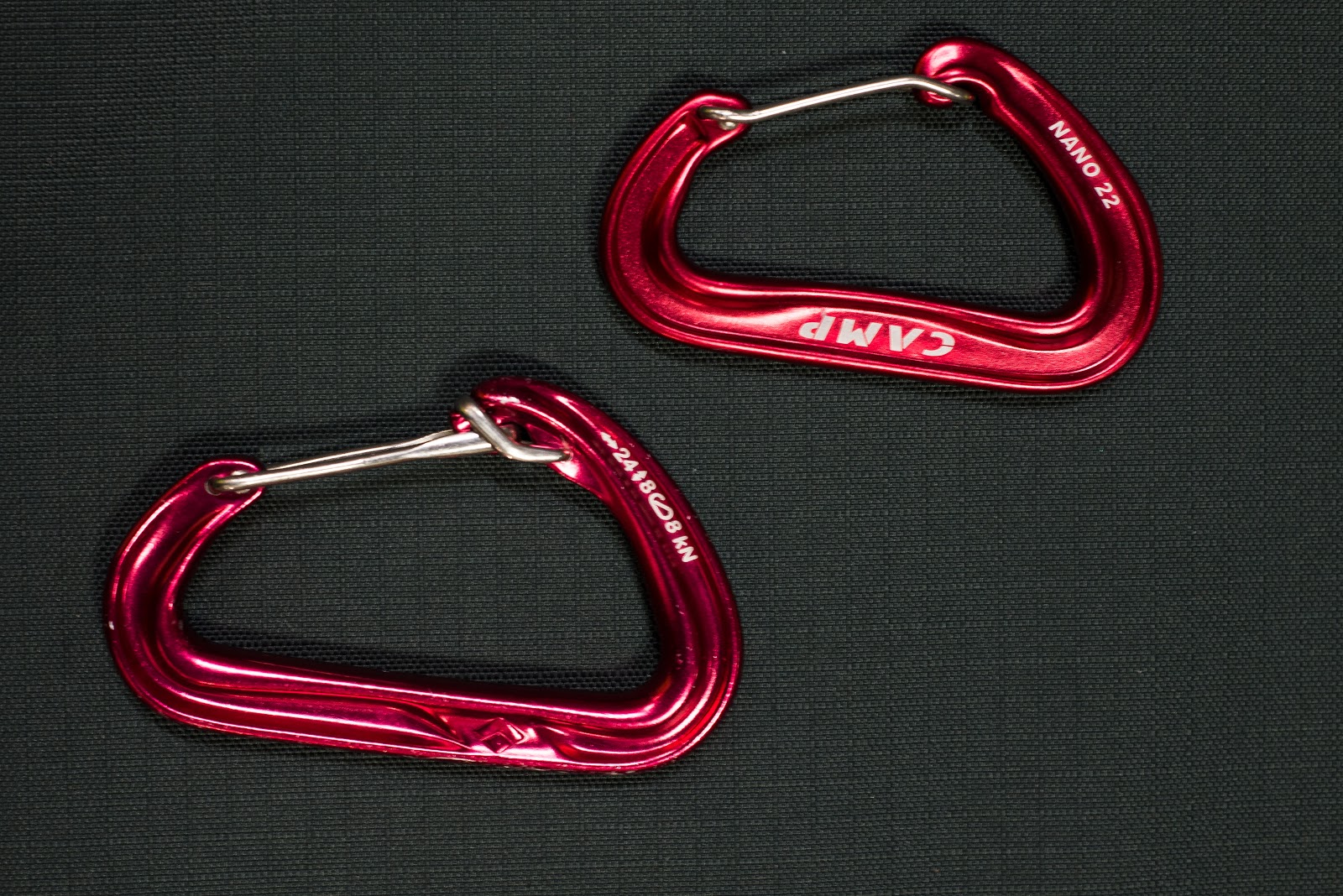 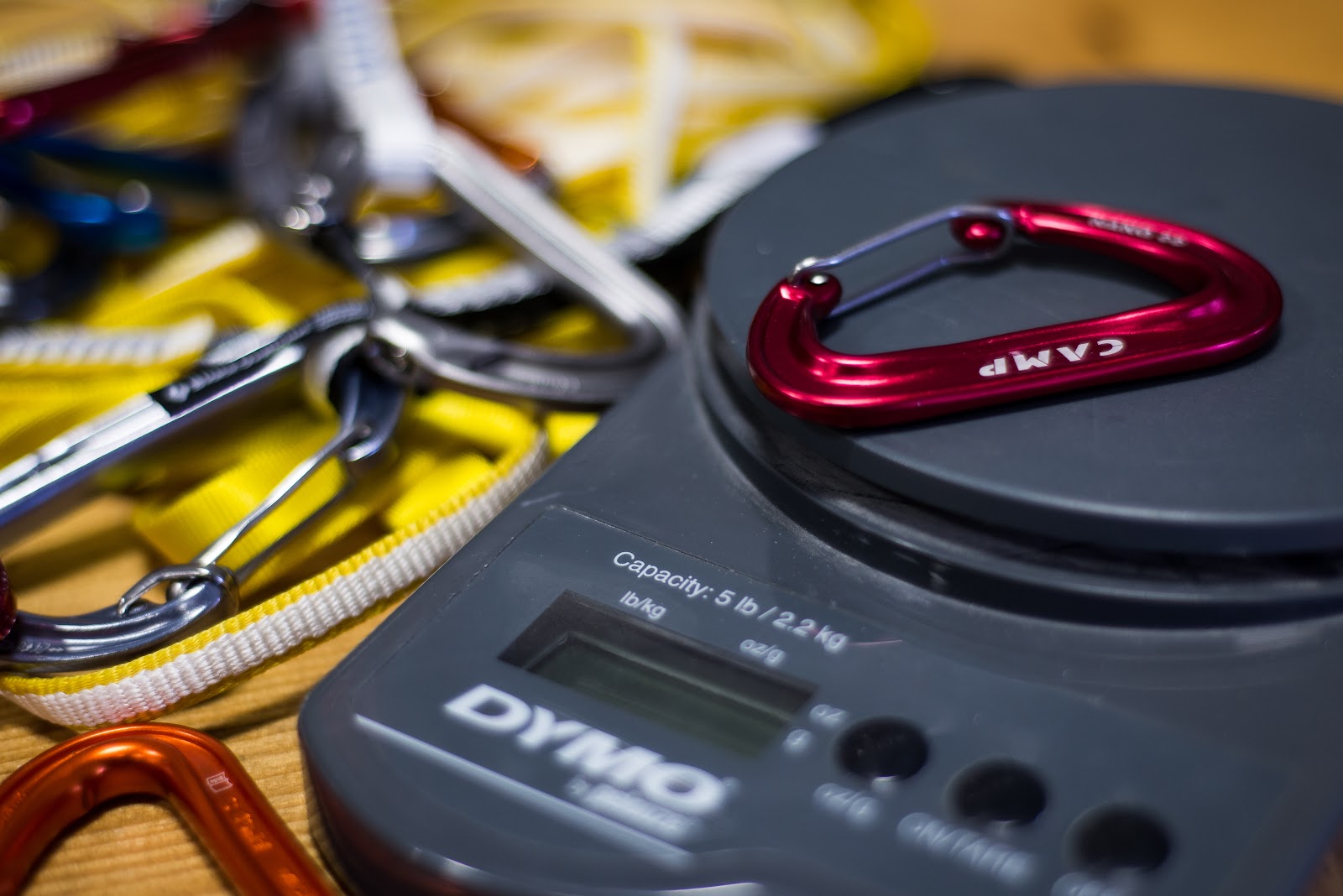 The switchover from sport draws with 3 nylon alpine draws, to the lightweight Astros with Dyneema alpine draws and shoulder slings was by far the most drastic cut in weight, shaving nearly a kilo off of my kit while still enabling myself to carry twelve draws. Between this, in combination with new racking biners, anchor, and a lighter rack of cams, I was able to save 1.48 Kilograms (3.27lbs.) total on the new rack alone. For the serious gram counter, going with the Black Diamond Ultralights for the #0.75-3 range could further decrease the weight by another 150 grams when doubling up.

Though it was nice to be able to start from scratch and replace the historic cams that had gotten myself through their fair share of adventures, it just goes to show how quickly the numbers can add up, even on things as small as the biners you’ve been racking with. So for those looking into replacing their older pieces of pro, biners, or even slings it may be worth looking into something a few grams lighter, because, in the end, a few grams here and there could save you close to a kilo by the time you’re done. Your partners and your back will thank you.

Below I’ve included charts comparing weights of the various gear considered during this process. The numbers gathered were either from the manufacturer's website themselves or weighed by myself for pieces such as the #0.4 friend that has no data on their site. 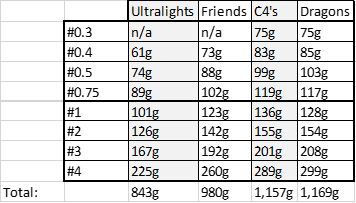 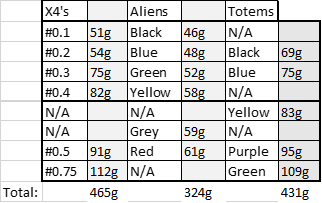