The Kahl Wall. A 280m 5.10a up the eastern side of the main face. The line was originally climbed in 1971 by Don Vockeroth and Tom Auger on aid and then freed by Barry Blanchard and Kevin Doyle ten years later.

The name was tribute to the first ascensionists friend and fellow Yamnuska pioneer Heinz Kahl, however Kahl was a play on words as well, meaning “blank” or bare in German, as this was the first route to step out of the obvious corners and lines of weakness and out onto the rather featureless faces of the mountain.

The Climb offers a bit of everything from off-width cracks and chimney climbing to techy face and slab sections. With a crux pitch offering bomber rock in combination with lots of bolts for pro, retrofitted belays with ring bolts for an “easy” bailout and fantastic climbing, this three-star classic makes for a perfect intro to the more moderate grades on Yamnuska. 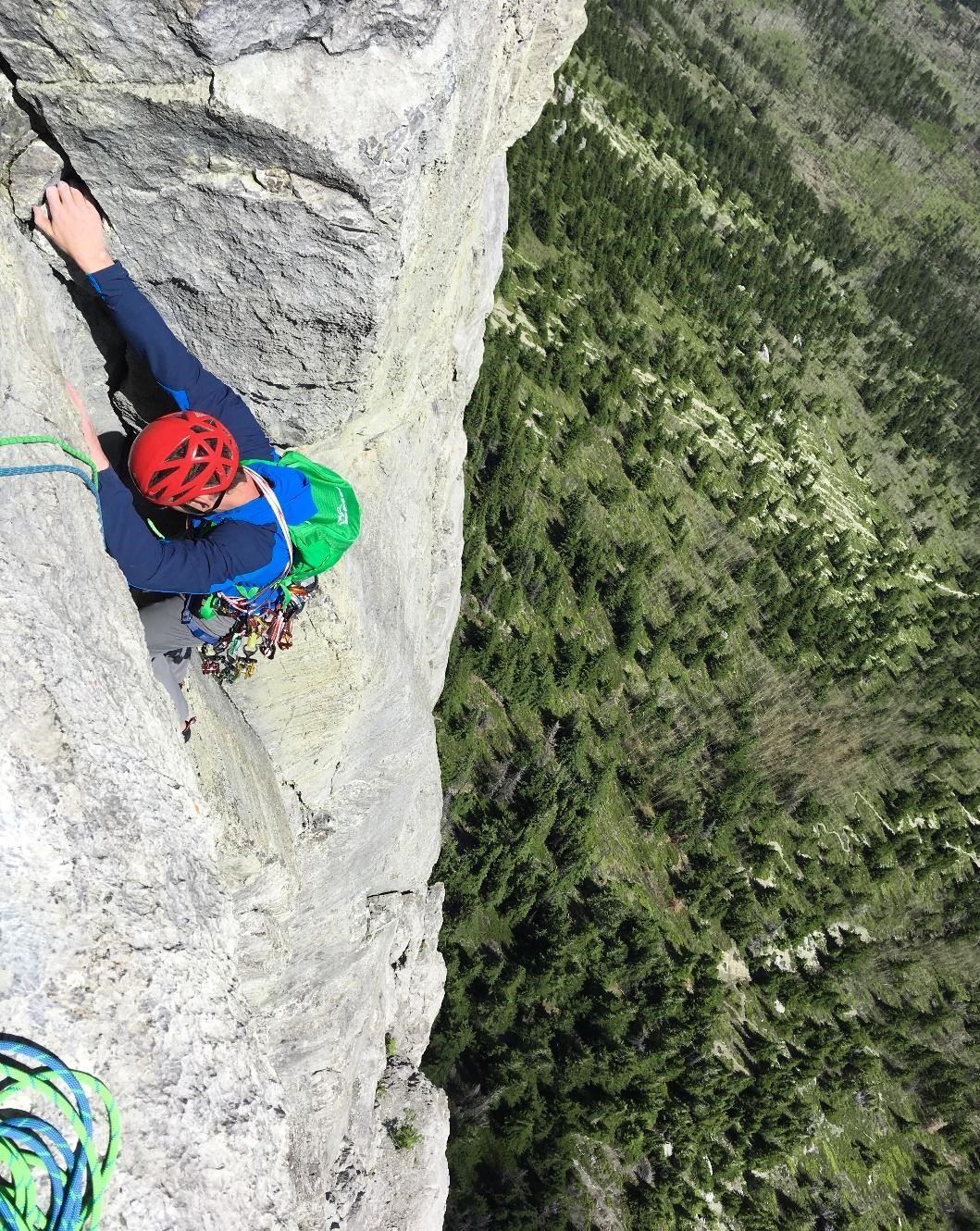 Pro: Single rack from micros to #4 and a small selection of nuts. We brought the “standard Yam rack” which consisted of doubles in the mid sizes and full set of stoppers, however very few cams were placed on each pitch, though I think by the time we topped out each one, from black alien- #4 camalot, had been placed. Though we didn’t place many nuts, I would still bring a small selection along. A #5 may have been more ideal than a #4 in some places.

Draws/Slings: 13 total - Four draws, four to six alpine draws, four single slings over the shoulder with a biner on each, and one double length shoulder sling. We had taken extras of each of these and it turned out to be far too much gear. Having the draws are nice for the crux pitch where things are well bolted in a relatively straight line, but most of the time bolts and pins were being extended with alpine draws, and gear with single length shoulder slings. A double length runner makes the rope drag more manageable on some of the wandering pitches.

Anchors: All the anchors have been retrofitted with two ring bolts, so a couple light wiregates like the CAMP nano22’s on a 120cm sling is plenty with a locker either girth of clove hitched in as a master point (or however you prefer your anchor).

Rope(s): Two 60m ropes are always advisable on Yamnuska as bailing out on a single may not be possible or be very difficult, and with a reputation for bad weather to roll over the top without warning, one should always be ready to retreat off this mountain. The added redundancy of two ropes is a good idea as well with the possibility of rock fall or sharp edges compromising the rope. I personally prefer the Mammut Twilight 7.5’s for trad and alpine as they are not only incredibly lightweight but pack small and handle phenomenally as well.

Other things to consider: Belay device, 3 locking biners (two for belaying, one personal clove), personal prussik, A small multi-pitch pack each since we’d be walking off the east ridge and not returning to the base of the climb. Though you can take the trail along the base to the bottom of the climb, you risk unnecessary rockfall hazard from other climbers as you walk along the eastern climbs. In the packs we carried first aid, bailout/rescue cordelette, a lightweight storm layer like the OR Helium II, our approach shoes, food, and water.

The Climb is located about 20m right of the climber’s approach trail starting up the obvious corner next to a bolted route just to the lookers left. We had heard the route finding was tricky for the first few pitches of the climb. We double checked the topo a couple of times, but for the most part, the route is fairly straightforward. 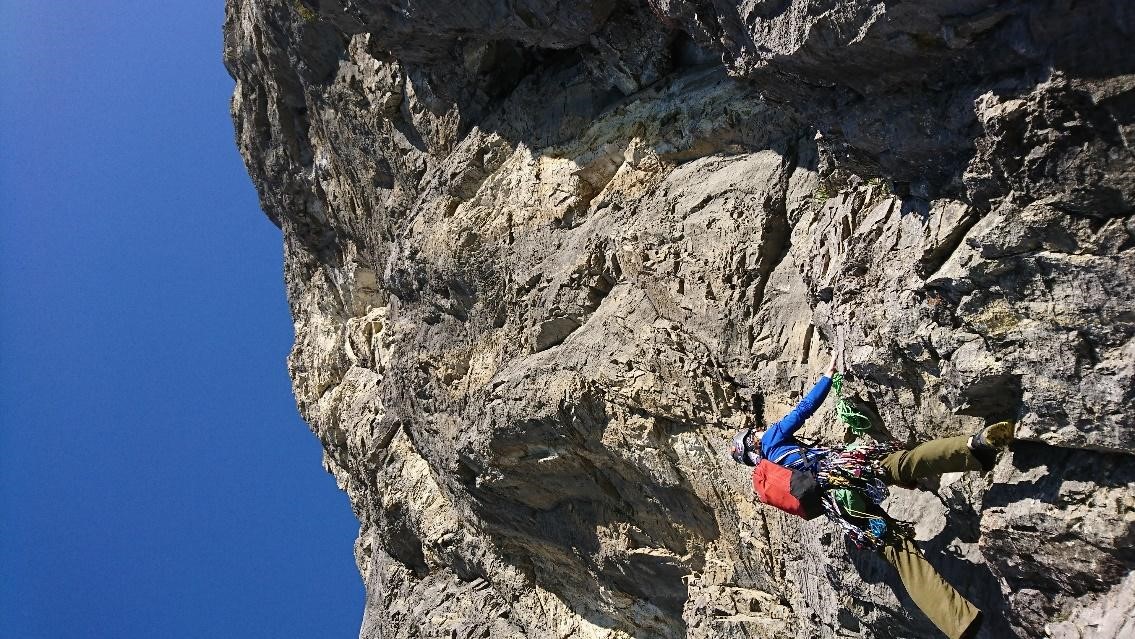 The first two pitches can be linked up to save time, just be sure to manage rope drag as the second pitch is mostly a traverse. Pitch one starts up an obvious 5.6 corner up to a ledge. We scrambled up a few meters from the base of the wall to gain the corner to give us a little extra rope just in case the 60m wouldn’t make it to the second anchor. Once on the ledge, you’ll see the first anchor, keep traversing left past a piton to a bolt. You may be tempted to move up this corner on what looks like easy climbing here, but continue the traverse left past the bolt around the arete/bulge to the groove mentioned in the guidebook and move up to a large ledge. Move left on the ledge to the set of ring bolts farthest left near the corner (there are two sets of ring bolts on this ledge). 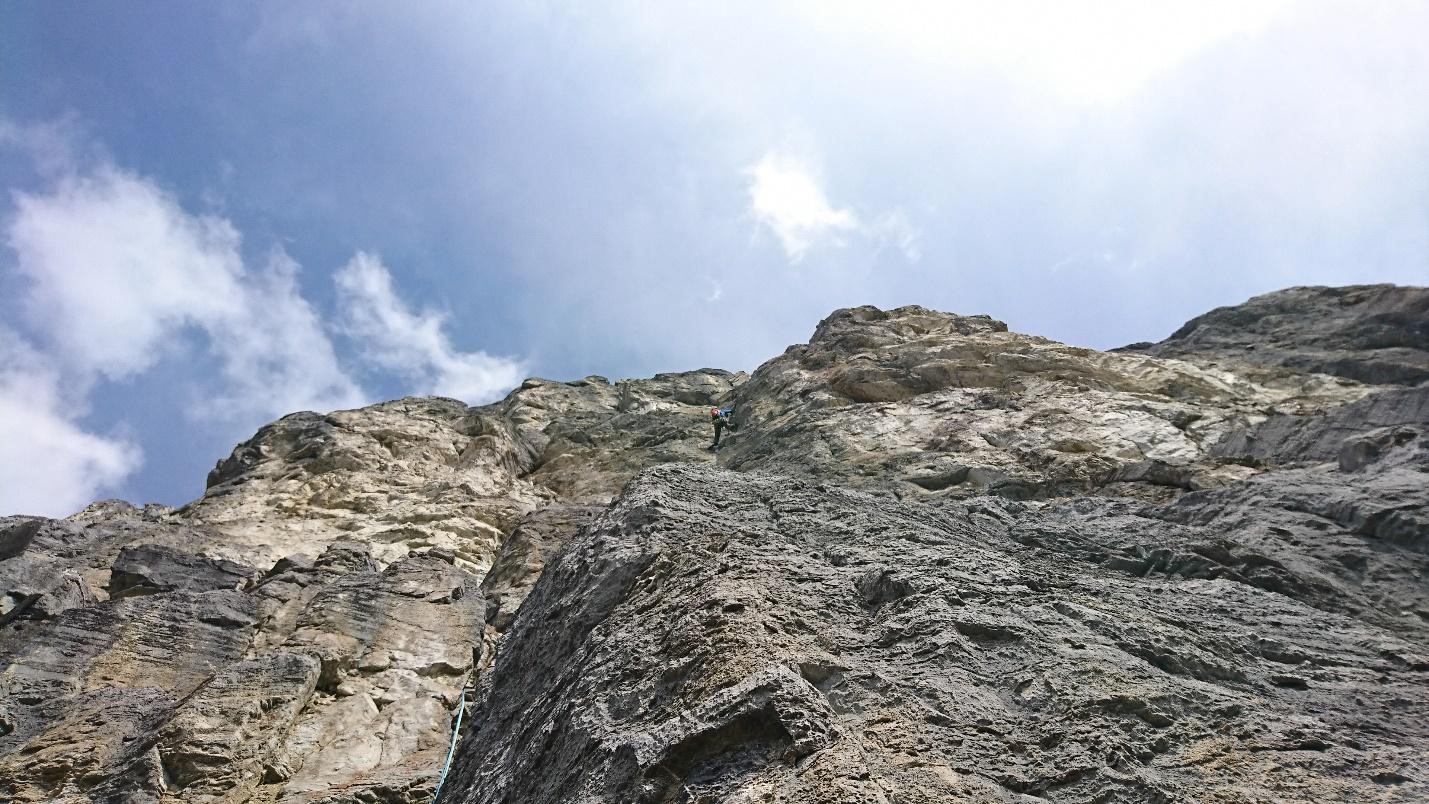 Move up the corner to a larger ledge, continuing on to a narrower ledge. Trend right to a fairly wide/ steep crack which will take the #4 Cam you brought along. Stem your way up to the next bolt belay just below the chimney.

Start up the off-width into the chimney and stem your way up. Move out right before the roof onto some easy terrain but beware as this is the choss of the climb. Move up to the ledge and start right, moving down with the ledge, through a slight depression, and up the other side to the next bolted belay. Keep your head game together for this one as there is little to no pro until you’re at this ledge 15-20m above the belay. You may be able to place a wide piece of gear in the chimney, but rope drag will be horrendous, and once out everything seemed too loose to protect safely until the ledge (the guidebook mentions a piton once out of the chimney that I may have missed).

The topo in the guidebook was a little misleading here, showing the start of the pitch being out to the right of the anchor by the trees and straight up being the start of pitch four on Bringers of the Dawn, however the bolt line slightly left of the anchor is Bringers of the Dawn with the fifth pitch of Kahl Wall being almost directly above the belay. It also shows what looks like a bit of a traverse at the top before reaching the anchor, but you'll find it more or less goes straight up, while trending right in places. Move up the corner above the belay past a bolt and moving right at the piton onto the face. Go up the left facing corner and top out on a small belay stance below a bolted line. 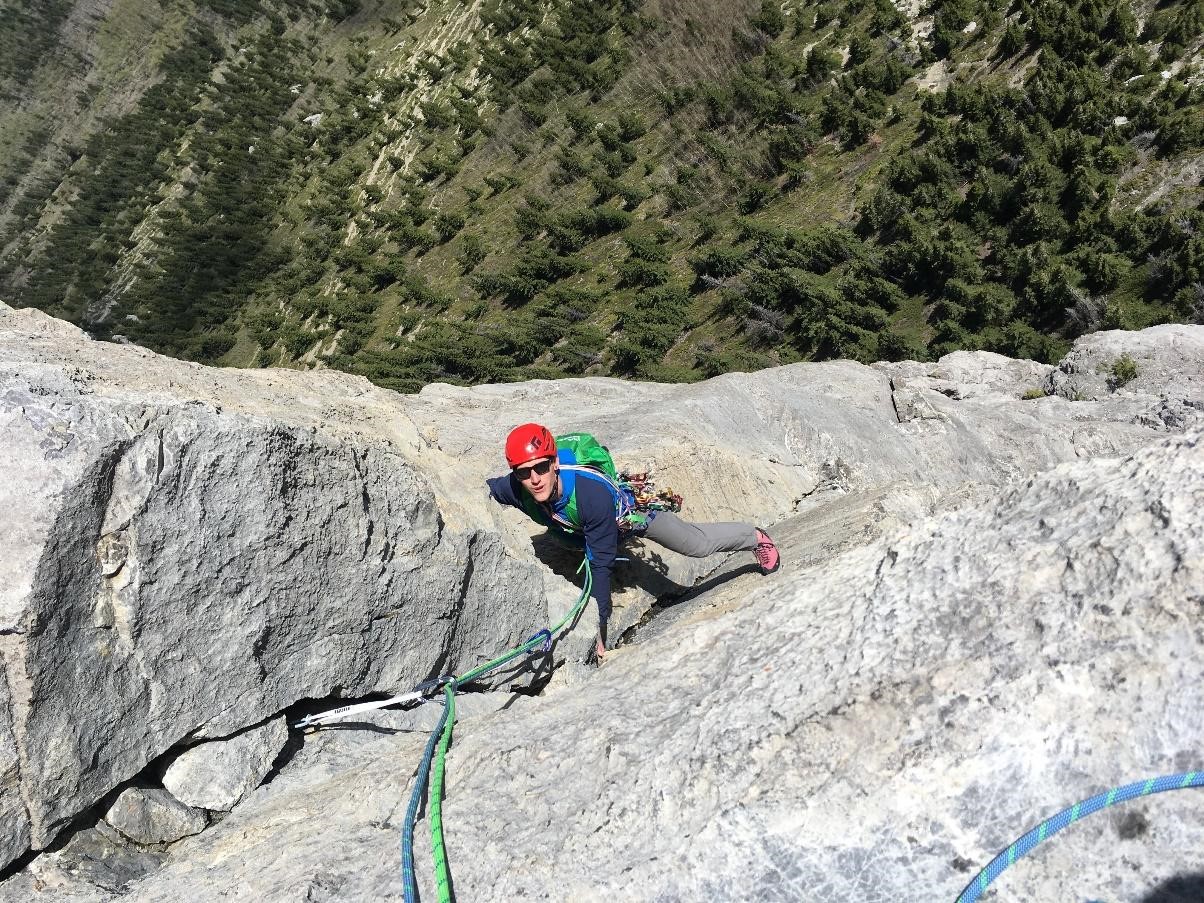 This is the first crux pitch and for some the most enjoyable as the techier moves on thin holds more resemble a day at the crag than a wrestling match with the mountain. It is bolted quite well with a piece of gear or two in solid rock. This pitch very straightforward, following bolts up to a corner, then moving right out onto a slab below a roof. Move up the slab to a bolt and move left back into the corner and make a couple steep moves to the belay ledge. Stellar!

Less sustained than the last pitch, make a couple of steep moves up the corner from the belay ledge. Place a 3” piece here, extended by a double length sling, before it steepens and make an exposed traverse right (though not polished, the amount of shoe rubber left behind should make it obvious) to a groove. Move up from here on easier climbing to a water runnel with a piton and some bolts above and follow up to the belay below the large corner above. 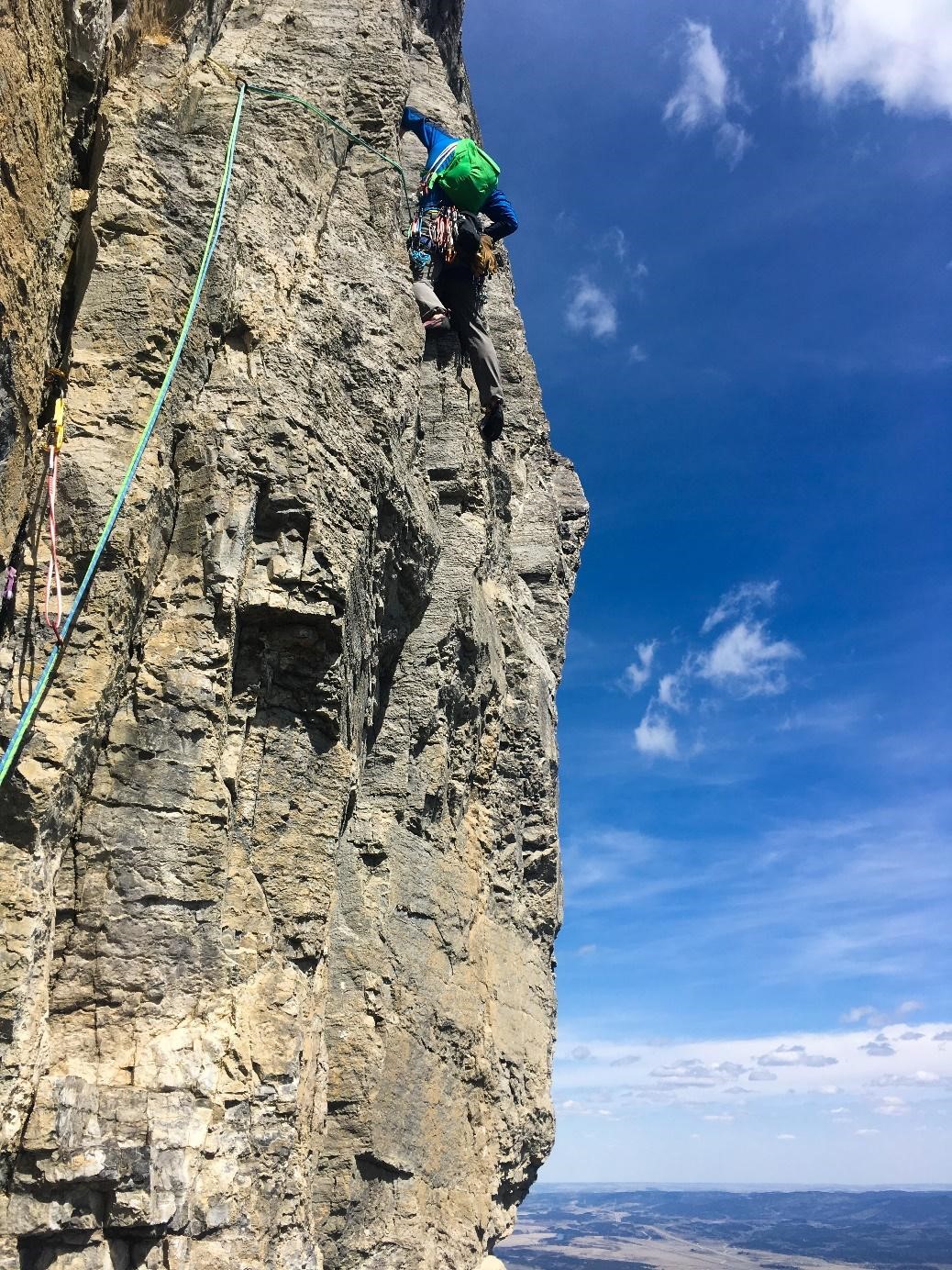 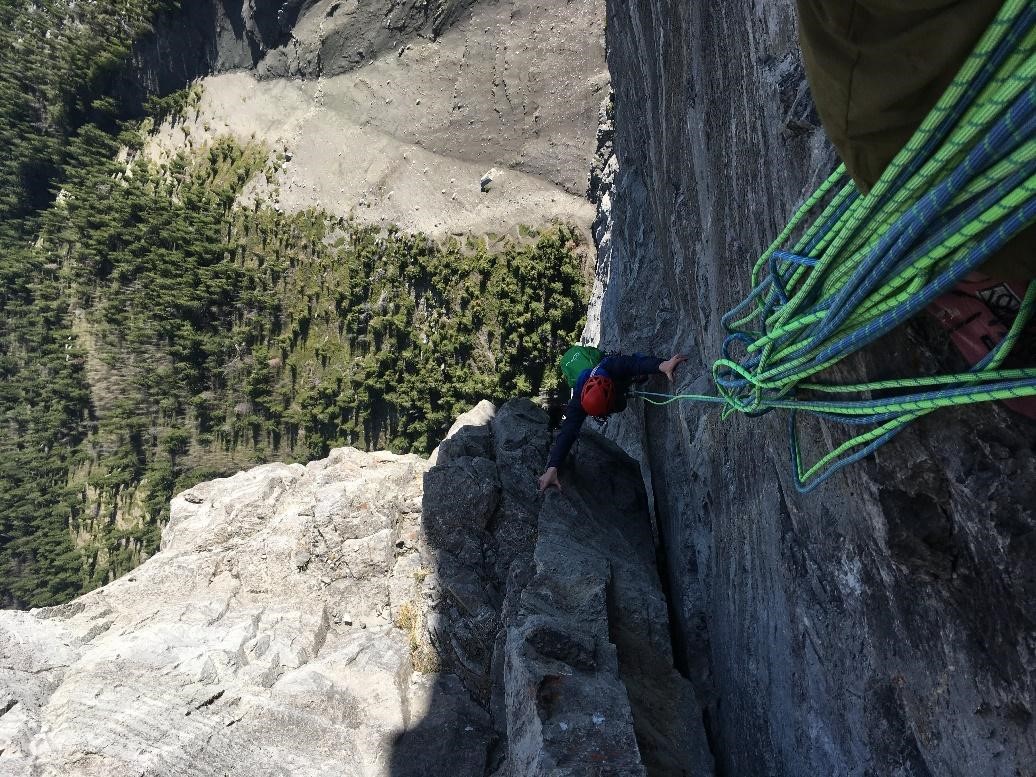 Very fun, but short-lived climbing for the grade. We had brought a #4 cam however a #5 would’ve been more ideal. Move up the wide/steep crack in the corner, finding a home for your large cam before pulling on a nice jug (if it is still there. Was quite loose) to move up to the tat (chock). Pull the roof off of a beautiful fist jam and continue up a few meters of easy terrain to the last anchor.

Walk off the back side and follow the east ridge hikers trail back to the parking lot. This is quicker and safer than walking along the base back to the approach trail.

If you’re not used to the style of climbing you may find some of the corners interesting, where style points go out the window as you shove body parts into the mountain and wrestle your way up corners rather than delicately dancing up your local sports crag. Nonetheless, it’s a full value adventure day that’ll have you coming back to the mountain for more. With its fantastic rock quality, luxurious belay ledges and fun climbing, it’s no wonder the Kahl Wall earned its three-star Yam rating. An absolute must do! Hit it Thursday through Saturday and take advantage of the awesome buffet at Stoney Nakoda afterward!